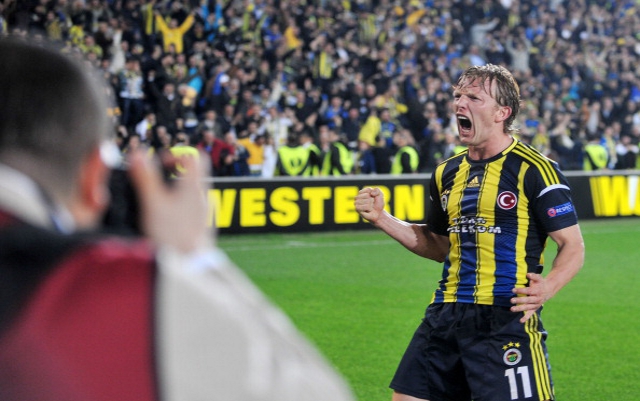 Welsh side keen on Fenerbahce veteran.

Newly promoted Welsh side Cardiff City will look to beef up their squad ahead of life in the top tier and to that end have been linked with a myriad of talents in recent weeks. The latest star-turn to be linked with a move to the Bluebirds is Fenerbahce forward Dirk Kuyt according to the Metro.

Malky Mackay will apparently look to lure the Dutch international back to the English top tier and will hope to have Kuyt link up with his former Liverpool team-mate Craig Bellamy.

Cardiff City may struggle to tempt 32 year old Kuyt into such a return given the successful first season he has had in Turkey. The adaptable forward, who can play out wide or as a target man up front, has scored 15 goals in all competitions for Fenerbahce, who he has helped to the Europa League semi-finals and second spot in the Super Lig.

Mackay will apparently be handed a £25m budget to invest in new talents and a move for Kuyt, though clearly something of a short-term one given the player’s age, would not break the bank.

Cardiff City are also said to be interested in Man City bench warmer Scott Sinclair, though a move for the 23 year old would clearly be a contentious one given his previous affiliation with arch rivals Swansea City.