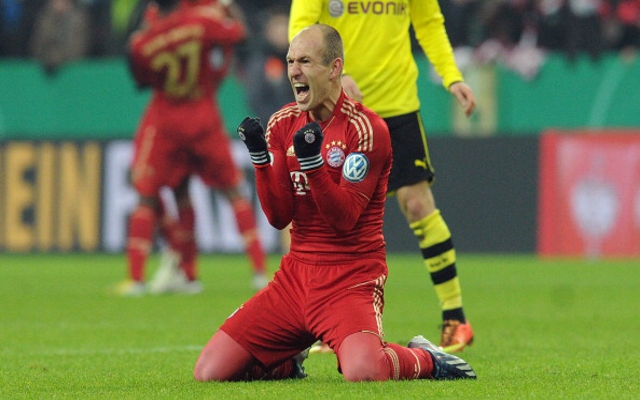 Check in to Bayern Munchen vs SC Freiburg

New Bayern Munich boss Pep Guardiola has reportedly told Arjen Robben that he can leave this summer as his his game has become to predictable, according to the Daily Mirror.

The former Barcelona manager, who will take over at Bayern at the end of the season believes that the 29-year-old’s attacking style is too one dimensional, realising that he will usually start on the right before cutting in and shooting with his left foot.

The news may begin a scramble for the ex-Chelsea man’s signature this summer after he has found himself behind the likes of Franck Ribery, Thomas Muller and Toni Kroos in the Bayern pecking order.

“It is disappointing to find myself on the bench so often, and I can’t say I am very happy about it,’ he said. ‘When I come on, I give everything for the team, but I see no reason why I should not be playing,” he said.

Bayern have also recently secured the services of Borussia Dortmund’s highly rated midfielder Mario Gotze, which could also signal the end of Robben’s time in Munich as he will clearly be the least favourite in a packed and talented middle ground.

There is also speculation suggesting that the Bundesliga champions have agreed a deal to bring Robert Lewandowski to the Alianz Arena, further strengthening their attacking options.

In four years at Bayern, Robben has made 177 appearances, scoring 86 times.