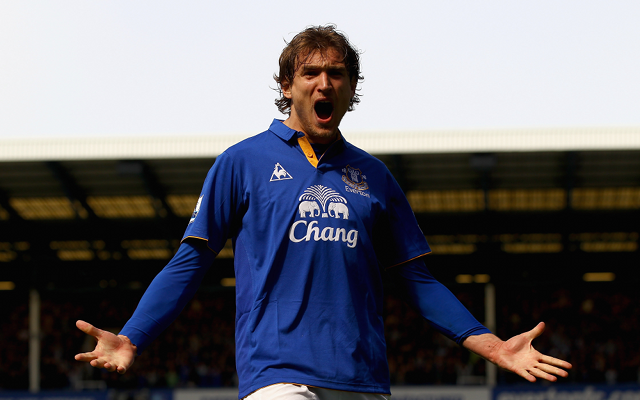 Goal shy striker told he has future at the club.

Everton striker Nikica Jelavic has been told that he has a future at the club despite scoring just one goal in his previous 18 appearances this season, The Express reports.

Jelavic made an explosive start to his Everton career scoring 11 goals in 16 games. He had arrived from Rangers for £5.5 million and seemed to settle in immediately, however, there had been rumours that he was ready to quit the club following his patchy recent form.

But boss, David Moyes has given a clear indicator that he backs the big Croatian to rediscover his goalscoring touch and fully expects him to be at the club next season.

“It ’s been a difficult season – maybe a bit of second-season syndrome if you want to call it that. He has found it a little harder to get the goals and the opportunities. His confidence has taken a bit of a knock,” he said.

“His effort has never been in question and we’d want him here next season.”

Jelavic has scored just eight goals in 39 games this term, though he is not the only one struggling as Victor Anichibe is also marooned on eight goals and Kevin Mirallas has seven.