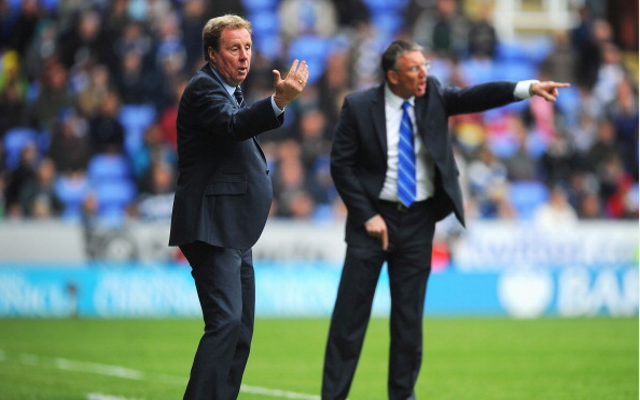 Reading & QPR have both been relegated from the Premier League following their goalless draw at the Madejski Stadium.

A win for either side would have kept alive their slim chances of staying up but both sides are now heading to the Championship.

But both looked wracked with nerves during a goalless stalemate which condemned Nigel Adkins’ Reading and Harry Redknapp’s QPR to starting next season in the Championship.

Bottom club Reading and second bottom QPR are both nine points behind fourth bottom Aston Villa with three games remaining, but a complicated equation means there is no chance of either avoiding the drop.

If Wigan and Villa lose their next three games they will go into the final day on 32 and 34 points respectively, while back to back wins for QPR and Reading win would give them 31 points ahead of the last match.

However, with Wigan and Villa playing each other on the last weekend, only one of them could be overtaken by QPR and Reading, meaning QPR and Reading are guaranteed to be in the bottom three at the end of the season.

QPR have been backed heavily by Malaysian owner Tony Fernandes over the last 12 months, but Redknapp concedes their expensively assembled squad won’t find it easy to win an immediate return to the Premier League.

“Next year it will be very difficult to get promoted, there are some good teams,” Redknapp said.

“It will be a big challenge, there are lots of good teams in the Championship

“For us to get promoted we have to come back in pre-season and get super fit.

“It you are not fit enough you won’t survive, you won’t get out of that league.”

Reading return to the Championship just 12 months after being promoted as second-tier champions and Adkins wants them to learn the lessons of their top-flight failure.

“I have told the players to bottle up the feeling as it is never nice to get relegated, and make sure they never feel that way again,” he said.

“For any new promoted team, it is a challenge to stay up. The Premier League is a ruthless division.

“We must now build for the future and learn the lessons well from this season. We have to regroup and put ourselves in a position to challenge to get back into the Premier League.”