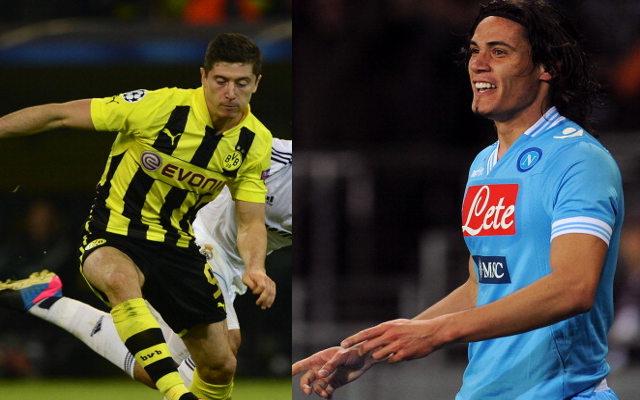 Roberto Mancini ready to ring the changes up front.

Man City are ready to fork out £75m as Roberto Mancini looks to re-shuffle his Etihad Stadium attack. According to the Daily Star the big spending side are lining up moves to sign Napoli ace Edinson Cavani and Borussia Dortmund striker Robert Lewandowski.

Mancini is apparently confident they have won the race to land Uruguayan Cavani for a fee in the region of £50m, a steep price to pay for any player but perhaps understandable given the form the 26 year old striker has been in over recent seasons.

Cavani has scored 98 goals in 134 games since moving from Palermo to the San Paolo and despite seeing his side give a real good show of themselves in the pursuit of Serie A champions elect Juventus it seems that the powerful forward may be ready to move on.

Man City are also apparently ready to make a move for Polish forward Lewandowski, who struck four against Real Madrid last week in the first leg of their Champions League semi-final with Borussia Dortmund, who has just over a year to run on his current contract and seemingly has no intention of renewing his deal.

Man United and Bayern Munich are both said to be keen on the 24 year old and there is sure to be a mighty scramble to sign the Bundesliga top scorer once the season comes to an end.

Roberto Mancini is ready to offload Edin Dzeko and there is growing speculation as to Carlos Tevez’s future at the club, leaving room for possible additions. The Italian boss apparently has no intention of selling Sergio Aguero this summer.