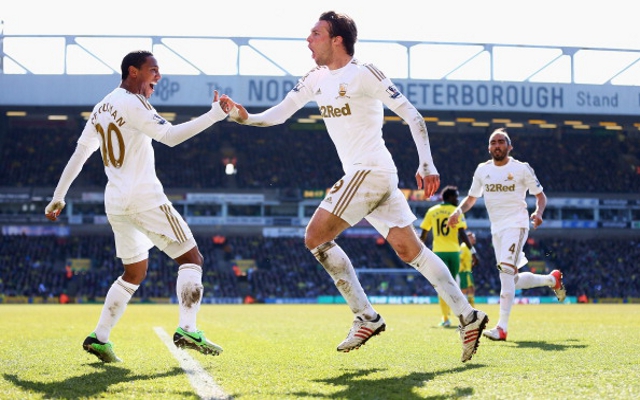 Swansea City are reportedly ready to entertain big money offers for their top scorer Michu at the end of the season, according to The Express.

The 27-year-old has undoubtedly been the bargain of the season after bagging 17 goals in 39 games for The Swans since arriving from Reyo Vallecano last summer for just £2 million.

However, despite the club rubbishing claims that the midfielder/striker will seek to force a move away this summer it seems that if the right offer comes their way then a switch may be up for discussion.

Reports suggest that Russian duo Anzhi Makhachkala and Zenit St Petersburg had bid £20 million for the Spaniard in the January transfer window whilst Spurs, Everton and Liverpool have all enquired about his availability.

Liverpool see him as the ideal cover for Luis Suarez as he serves out his ten game ban.

Swansea do want him to stay at the club, having offered him a new four year deal at the start of the year, but have admitted that a ‘monumental’ offer may cause them to think twice.

And if a sale is sanctioned they will go after Tottenham target Alvaro Negredo from Sevilla. Michel Laudrup sees him as the ideal replacement and would have the funds to pursue him should he receive a big money offer for Michu.