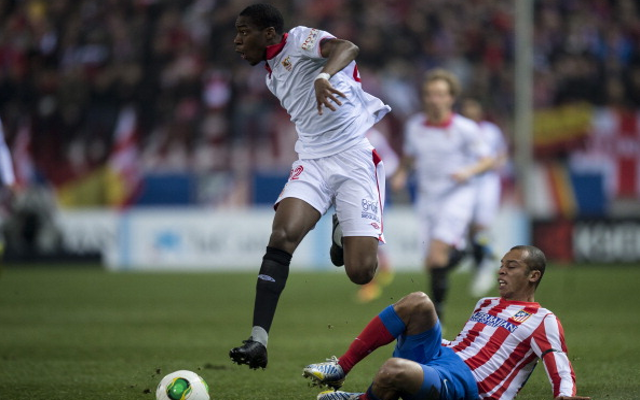 Arsene Wenger has confirmed his interest in highly rated Sevilla midfielder Geoffrey Kondogbia according to The Sun.

The 20 year old midfielder left French side Lens for La Liga outfit Sevilla and has impressed many with his battling displays, making 26 La Liga appearances thus far for the Andalusian side.

The French Under 20 international is also being pursued by Chelsea, Man City and Real Madrid but Wenger will hope to win the race for the £17m rated midfielder.

“I don’t really want to talk about Kondogbia too much because everyone’s after him at the moment.

“When you ask ‘Are you also interested?’ what do you expect me to say?”

Arsenal could well do with a defensively minded midfielder having failed to adequately fill the void left by Alex Song’s departure to Barcelona last summer.

Mikel Arteta has had to play much of the season in an unfamiliar holding role and with Abou Diaby once again sidelined with a long term injury there is a very real need to bring in a player that can add bite to the Arsenal midfield.

Though some may be concerned as to how speedily a player of Kondogbia’s tender years would settle to life in the Premier League Arsene Wenger is clearly a manager who is more than happy to throw young talent’s in at the deep end.