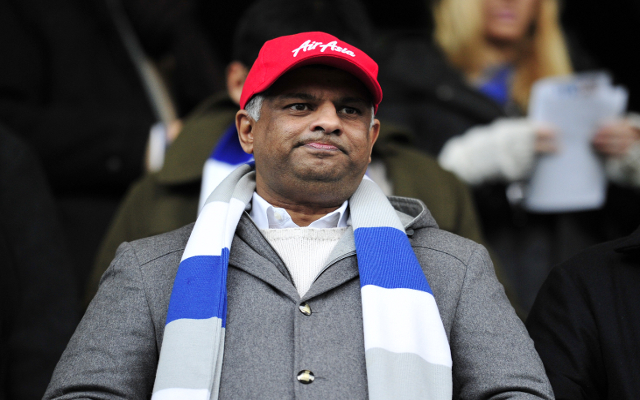 Queens Park Rangers owner Tony Fernandes has accused his players of not caring about the club’s fall from the English top tier.

QPR’s relegation from the Premier League was confirmed on after a 0-0 draw at Reading that condemned both sides to the second-tier Championship.

Fernandes has confirmed that boss Harry Redknapp will continue in his role next season, but the Malaysian businessman says he feels let down by the players.

“It’s heartbreaking for me when we lose. I don’t want to go out, I just want to stay at home,” he told QPR website.

“I am someone who has dealt with success and dealt with disappointment. But there is nothing I have gone through that is as disappointing as losing a football game.

“I haven’t said it throughout the season because it wasn’t right to be said, but it hurt me when I saw some of the players who didn’t feel the way I felt. And in fact, in their case, it should be worse because this is their job, it’s their life. It wasn’t a good feeling.”

Fernandes ploughed millions of pounds (dollars, euros) into the club in an attempt to stave off relegation, notably sanctioning big-money moves for players such as Christopher Samba, Loic Remy, and Park Ji-Sung.

Some of QPR’s players were criticised in the British media for smiling and laughing after the final whistle in Sunday’s game at the Madejski Stadium, and Fernandes has admitted he found the images hard to stomach.

“It was probably the low point for me when I saw the reaction of some of the players. It has shocked me because it is something that is alien to me,” he said.

“Whatever I have done as a job, for whoever has hired me, I put in 150 percent. It’s in my character. If I am taking someone else’s money, then I am going to work bloody hard for that person.

“It wasn’t right to say anything during the season, but I noticed everything and I am a little bit wiser for it now.”