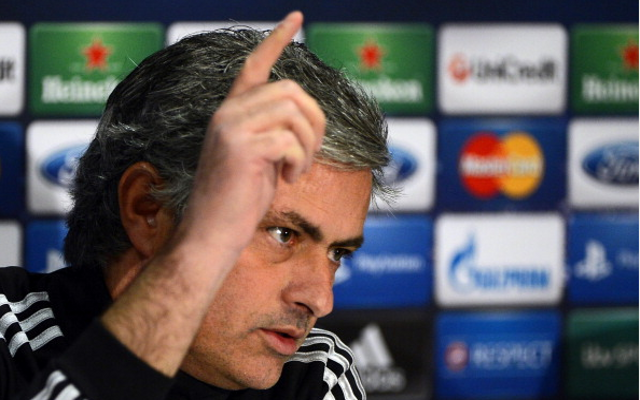 Jose Mourinho has called on his side to be more ruthless when they face Borussia Dortmund in the second-leg of their Champions League semi-final on Wednesday night.

Madrid need an incredible comeback after four goals from Robert Lewandowski helped the Germans romp to a 4-1 victory in the first-leg last week and Mourinho believes his side have to perform with the type of aggression they did in the 2-1 win over Atletico Madrid on Saturday.

“The team was naive. We played against a player that scored four goals and wasn’t fouled in the whole game, whilst Cristiano (Ronaldo) was fouled five times and the game had barely begun. It was like we were playing a friendly.

“Mentally and physically we need to be stronger. At the Calderon on Saturday I saw a team that knew how to suffer and defend. A team that was compact, united, aggressive and worked towards an objective.”

However, Mourinho insisted that the outcome of the second-leg would not have an effect on his future at the club.

“My future won’t depend on that. At practically all clubs, not just Madrid, the success is thanks to the players and the failure is that of the manager.

“We have 90 minutes to play and we are 4-1 down. What I am concerned with is analysing what happened in Dortmund and what we have to do tomorrow.

“The game in Dortmund was so bad that I am not concerned about them, I am concerned about what we have to do better. No player is hiding, we are all in the same boat and all of them want to play, which gives me confidence and hope for the game. In football everything is possible.”

Mourinho confirmed that Ronaldo trained on Tuesday morning and will play despite continuing to feel the aftereffects of a thigh injury picked up in the first-leg.

Alvaro Arbeloa and Marcelo remain Real’s only two absentees through injury, but the return of Michael Essien means that he could line up at right-back with Sergio Ramos moving into central defence after the torrid time Lewandowski gave Pepe last week.

And Ramos said he will play in whatever position is best for the side, although he feels more comfortable at centre-back.

“In the past few years I have played as a centre-back, it gives me more control of the game. Due to the circumstances I had to play at full-back and it wasn’t a problem.

“I have won the European Championships and the World Cup playing there. The manager will look at what is best for the team to decide where I should play.”

Ramos had criticised Madrid’s attitude in the wake of the match last week and he echoed Mourinho’s sentiments that they need to be more aggressive on home soil.

“The other day when I spoke of attitude I meant our intensity, aggression and rhythm of our game wasn’t as it should have been. If we have greater intensity and rhythm it will be less of a problem but it is still a very negative result to overturn and will be very difficult.

“We can’t take away the credit from Dortmund, they played a great game and deserved to win but the other day we didn’t win personal duels that we normally do.”

Borussia Dortmund manager Jurgen Klopp has insisted his side won’t freeze in the second-leg of their Champions League semi-final against Real Madrid on Tuesday despite their relative inexperience.

The German side take a commanding 4-1 lead to the Santiago Bernabeu thanks to Robert Lewandowski’s four-goal haul in the first-leg last week and Klopp is confident his players have built up enough big game experience over the past few years to ensure the big stage doesn’t get to them.

“I don’t think any of our players have played in a Champions League semi-final before, but for us it a similar situation to the German Cup final last year,” said Klopp, whose side drew 2-2 in Madrid in the group stage.

“Then we had to face Bayern Munich after we had won the league and they were giving everything, but my players were very cool on that day because the only way to achieve your dream is to be brave so that is what we try to do.

“We could lose the game of course, but the way you lose the game is more important. The players can only give their best and I have no doubt they will do this.”

With a three-goal advantage the obvious gameplan for Dortmund would be to sit back and wait for their opportunities to counter-attack, but Klopp said they will go in search of the away goal that could seal the tie.

“We will neither go out to defend or attack. We have to wait and see what happens during the match and it would be silly for us to say what we are going to do just now. We have great attacking potential and if we need it tomorrow we have the necessary strength.

“The important thing in football is balance. When we attack, we all attack. When we defend we all defend.”

Should Dortmund make it to Wembley for the final it would seal a remarkable recovery from a club that was close to bankruptcy as recently as 2005 and if they withstand the expected onslaught from Madrid, Klopp believes it is their qualities as a team that will have proved decisive against the Spanish champions.

“No one could have imagined we would be here some years ago. We need to focus on tomorrow’s game, we haven’t achieved anything yet and we are only halfway. Something historic will happen tomorrow either way, it will be a historical feat if we qualify and if we are knocked out.

“We have a very good team but we know the best individuals don’t win but rather the team that gives the best collective effort.”