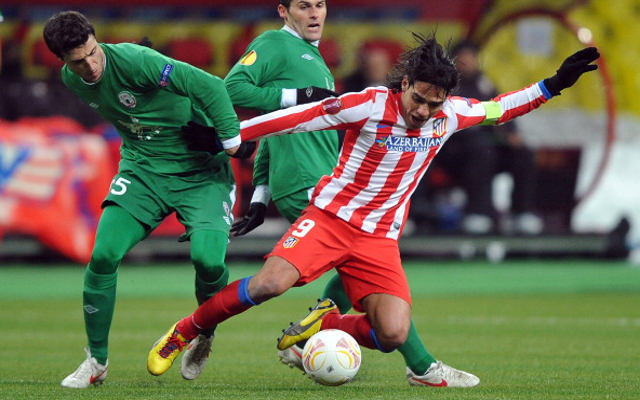 Atletico Madrid’s Falcao has been told he should choose a move to Manchester United.

In-demand striker Falcao has been advised by Colombia legend Faustino Asprilla to join Manchester United if he leaves Atletico Madrid this summer.

The former Newcastle man told the Daily Mail that he believes Sir Alex Ferguson’s side to be the perfect move for any top footballer, because of the way they conduct themselves off the pitch, as well as their obvious success on it.

Falcao is valued at around £46million for his fine displays for Atletico this season, and is being linked with almost every big club in the world, with Real Madrid, Chelsea, Manchester City and PSG all keen to rival United for his signature.

The Red Devils appeared favourites to sign the Colombian hitman, before the player’s wife stated their desire to remain in Madrid for the birth of their child.

Still, there could be a further twist in the story, with Asprilla saying he has advised Falcao to choose United over other clubs.

He said: “We were talking and he asked me my opinion on who he should join. He knows that every big club in the world wants him. He is not a player motivated by money – what he wants is somewhere that his family will be happy and where he will have success.

“With teams like Real Madrid, PSG, Manchester City they have good times then they have bad times – that is why I told him he must choose Manchester United. Every season they are challenging – and if he wants success that is where I have told him to go.

“Also they don’t have all the behaviour away from the field – with changing coaches every season. They are steady in all that they do – and a well run club at every level. He is a real family guy – and Radamel will appreciate that and the way that Sir Alex Ferguson protects his players like family.”

Asprilla added that he believes Falcao to be the best finisher in the world right now, and compared him with his former Newcastle team-mate Alan Shearer, arguably the best striker in Premier League history.

“It is difficult for me to explain how good he is – he is the best finisher in the world,” he added. “The only striker who has played in the Premier League who is on his finishing level is Alan Shearer.

“If he signs for Manchester United – he would be their missing piece in the Champions League. Robin van Persie and Radamel would be unstoppable.”

United are also interested in Borussia Dortmund’s Robert Lewandowski, though they could miss out on his signature to Bayern Munich.