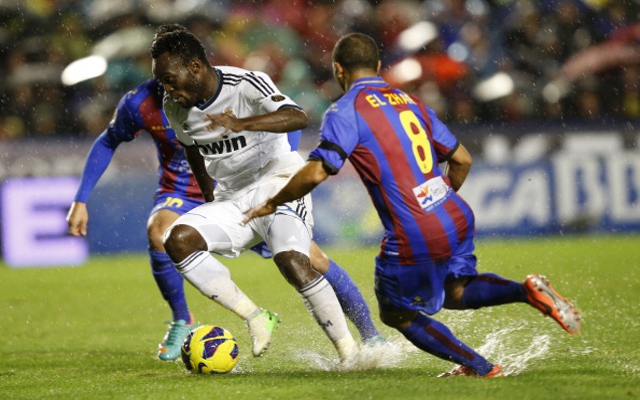 Michael Essien hopes his loan at Real Madrid will earn him a return to the Chelsea team.

Michael Essien hopes he will get another chance at Chelsea next season, after his performances on loan at Real Madrid this season, according to Football 365.

The Ghana midfielder has been plagued by injuries in recent years, and fell out of favour at Stamford Bridge. He was offered to a number of clubs last summer, but many were unwilling to take a gamble on him due to his repeated fitness worries. However, he has done reasonably well under former Chelsea boss Jose Mourinho at Real.

The 30-year-old will return to Stamford Bridge at the end of the season, and he believes his time with Madrid has shown he can earn a place in the Chelsea team.

“I will return to Chelsea with my head up and try to win my place back,” he said.

“I think my loan at Madrid has shown I have still got it at the top level.”

Mourinho has also been linked with a return to Chelsea, and that might prove a decisive factor in whether or not Essien plays for the Blues again. The Portuguese tactician is a fan of Essien, first bringing him to the club from Lyon in 2005, and then taking the chance to work with him again at Real Madrid this season.

However, these are uncertain times at Stamford Bridge and it is not yet known who will be boss after Rafael Benitez leaves at the end of this campaign.