A collection of Emirates Stadium talent Arsene Wenger should consider getting rid of this summer. 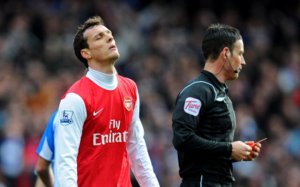 The French defender has barely been seen since his disastrous first season with the club in 2010/11, which suggests he should probably be on his way. Signed from Sevilla as experienced backup to Laurent Koscielny and Thomas Vermaelen, Squillaci looked well out of his depth in almost every game at Premier League and Champions League level. Despite his lack of action, he still collects wages believed to be around £60,000 per week and his imminent departure, with the veteran being out of contract this summer,would free up some serious money to be used on players who actually play.