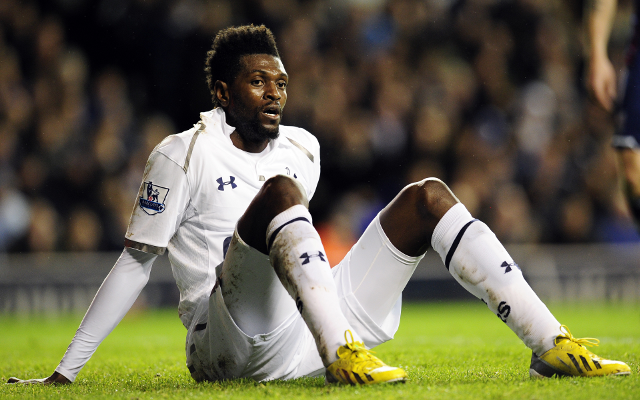 Tottenham have decided to give up on flop Emmanuel Adebayor and sell the Togolese striker this summer, according to the Daily Mirror.

The former Arsenal and Manchester City man joined Spurs on a permanent deal in the summer after spending last season on loan at White Hart Lane.

His form in his first spell was enough to earn him a move after he was frozen out at the Etihad Stadium, but he has struggled to replicate his form this year, with just three goals in the Premier League in 22 games.

The 29-year-old is on £100,000 a week wages and is certainly not looking worth the money at the moment, and recently skied a crucial penalty in Spurs’ penalty shoot-out defeat in the Europa League to FC Basel.

With Jermain Defoe also struggling for goals, a new striker is a top priority for manager Andre Villas-Boas this summer, but he will have to offload high earners like Adebayor before being able to afford to bring in new recruits.

Monaco, another of Adebayor’s former clubs, are said to be keen on bringing him back to Ligue 1, while former Marseille striker Loic Remy could join Tottenham for a cut-price deal from relegated QPR.