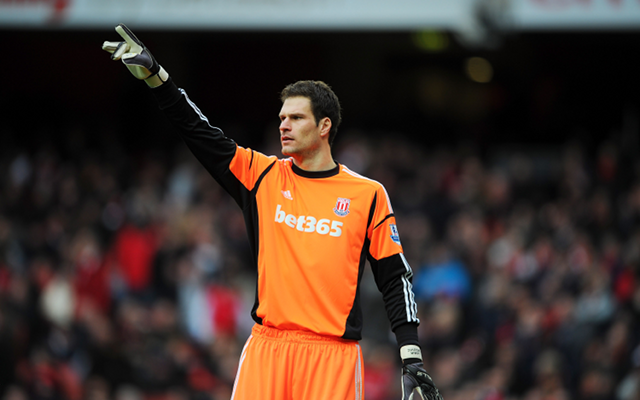 Stoke City manager Tony Pulis has denied that goalkeeper Asmir Begovic has already been sold, according to the Daily Star.

The 25-year-old has been heavily linked with a move to the likes of Manchester United and Arsenal for a fee in the region of £15 million, but his current manager has stated that he’s not going anywhere.

The impending arrival of young England international goalkeeper Jack Butland from Birmingham City this summer is said to be causing the 6’5 Bosnian to reassess his future in the Potteries and has fuelled the rumours of a switch at the end of the season to ensure he keeps a hold of the number one spot.

However, despite United and Arsenal having trouble with their own custodian’s, Pulis has said that nobody should be surprised to see him at the club next season.

“No, no-one’s rung me up to ask about Asmir and if they did the price would be … I can’t even think. They’d have to spend a hell of a lot of money to take him away. I couldn’t even give you a price because I haven’t even thought about it,” he said.

Begovic has made 35 appearances for Stoke this season and has been one of the brighter sparks in an otherwise dull season.