Top ten high-profile players who could leave the Premier League this summer – for a variety of reasons. 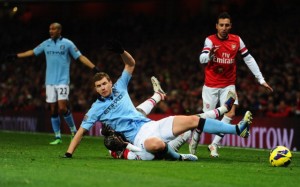 The Manchester City striker has not lived up the hype that surrounded his signing from Wolsburg in 2011. Despite the occasional short-lived purple patch in front of goal, the Bosnian does not look suited to English football and is a target for Serie A clubs Napoli and Juventus, as well as a possible return to the Bundesliga.