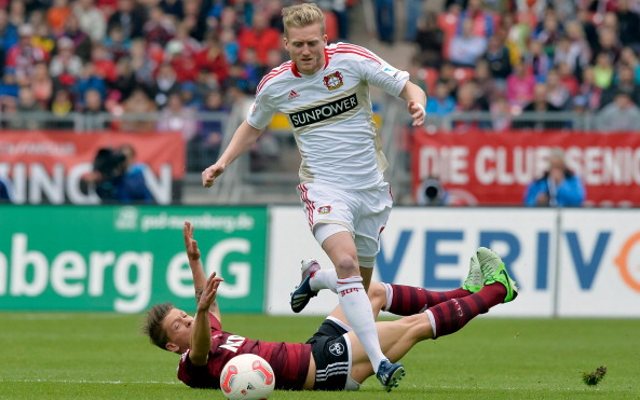 Chelsea are to sign Bayer Leverkusen forward Andre Schurrle after agreeing a deal said to be worth £20m to snap up the German international.

The 22 year old has long been a Blues target and after a number of failed attempts the two clubs have agreed a price for the youngster and personal terms with the adaptable attacker are also reportedly sewn up.

The Bundesliga side are also hoping to lure Belgian midfielder Kevin de Bruyne to the BayArena for next season though such a deal is not thought to be directly connected with Chelsea’s deal to clinch Schurrle.

Schurrle can play in a number of positions, from a wide attacking role to an orthodox striking position, and having helped Sami Hyypiä’s side to secure a Champions League berth Bayer Leverkusen may well have become more open to going public with any news on a concrete deal being reached.

“Andre Schurrle has probably signed a pre-contract deal with Chelsea”

“It all depends on whether we let him go. We have received a concrete offer for a fee which we are considering.

The signing of Schurrle may well call into question the futures of a number of Chelsea strikers, specifically Spanish flop Fernando Torres, who has now gone over 1000 minutes without a Premier League goal, as well as loaned out Belgian Romelu Lukaku, who has had an excellent season at West Brom.

The fact that Chelsea are also chasing a number of ‘Marquee’ signings who could further strengthen the Chelsea attack may well further impact on the futures of a number of Blues attackers.