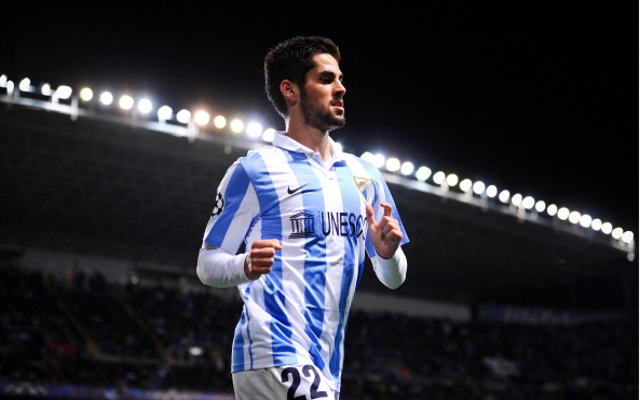 Manuel Pellegrini could bring Isco with him to Manchester.

Manchester City could land two crucial signings from Malaga – their manager Manuel Pellegrini and star player Isco – in a sensational double swoop, according to Spanish news source AS.

Both Pellegrini and Isco have been the subject of much speculation towards the end of the season, as the pair seem likely to leave Malaga in the summer.

Boss Pellegrini was also rumoured to be a target for City’s Premier League rivals Chelsea, though they seem to be nearing a return for former manager Jose Mourinho, who will leave Real Madrid at the end of the season and replace interim coach Rafael Benitez.

Isco has caught the eye with some great performances in La Liga this season and is also a target for Chelsea, Real Madrid and PSG, but it looks like the 21-year-old is keen to follow Pellegrini to the Etihad Stadium.

Stories emerged in the last few days that the Chilean manager had met with City officials, as the club look to have lost patience with Roberto Mancini, who has been critical of the club for their lack of support in the transfer market as they lost out on the Premier League title this season to rivals Manchester United.

Pellegrini has done a fine job with Malaga and recently stated that he was happy to stay with the club, though he admitted his future had not been resolved. His signing for City looks to be a huge boost for the club ahead of their quest to win back the Premier League trophy next season.