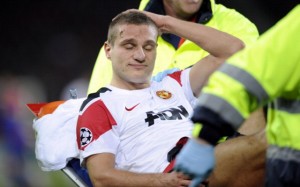 The Serbian centre-back was a shrewd piece of business by Ferguson, joining from Spartak Moscow for just £7million and going on to become one of the best defenders in the country. A crucial part of the success enjoyed by United between 2006 and 2009, when they won three titles in a row and ruled Europe after beating Chelsea in the Champions League final.