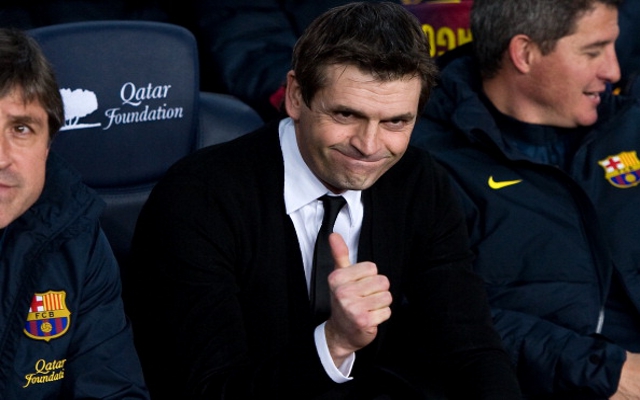 Barcelona have clinched their fourth La Liga title in five seasons following Real Madrid’s draw against Espanyol, which gave Tito Vilanova’s side an unassailable lead at the top of the table.

Espanyol took advantage of Jose Mourinho resting a host of first team players in the first half ahead of Real’s Copa del Rey final with Atletico Madrid on Friday.

And they deservedly went in front through Christian Stuani on 22 minutes.

However, after the introduction of Cristiano Ronaldo in the second-half, Madrid rallied and were level when Gonzalo Higuain flicked home Luka Modric’s free-kick just before the hour mark.

But Los Blancos couldn’t find the winner they needed to keep the title race alive as the point leaves them seven adrift of Barca with just two games remaining.

“There is nothing more to do than congratulate them,” Real midfield Xabi Alonso told Canal Plus.

“The league is a tournament of consistency and we had a very bad start that didn’t allow us to compete until the end.

“Right now the objective of Real Madrid is the cup. We want to fight for this title because we have a great desire to lift it in our stadium.”

Barca, who face Atletico Madrid on Sunday, could match Real’s league record total of 100 points from last year if they win their remaining four games.

An incredible first-half to the season, in which the Catalans dropped only two from a possible 57 points, was the key as Barca virtually guaranteed the title in Tito Vilanova’s first season in charge.

By contrast, Madrid were left to rue early season defeats at Getafe, Sevilla and Real Betis as they fell 18 points behind their rivals by the turn of the year.

And despite a difficult spell on and off the pitch in 2013 as Vilanova had to travel to New York for cancer treatment, Barca have remained consistent in the league thanks to another sterling season from Lionel Messi.

The Argentine has scored in 20 consecutive league games he has been involved in and is just four shy of his own league record of 50 goals in a season.

“This triumph is very special, a prize of effort, of an overcoming spirit and the perseverance of an extraordinary group of human beings,” Barca president Sandro Rosell said via his Twitter account.