With speculation of an imminent return of Jose Mourinho to Stamford Bridge it appears that the West London side will look to bring in a pair of talented German international’s to beef up the Chelsea squad this summer.

The Daily Mirror claim that the Blues will look to follow up a move to lure Mourinho away from the Bernabeu with a move to also capture a Real Madrid star-turn.

Chelsea are linked with a £20m move for tough tackler Sami Khedira who may be seen as a preferable alternative to the defensive midfield options currently in the Premier League side’s squad.

Indeed the 26 year old battler could be a better option that the likes of John Obi Mikel, Oriol Romeu and Michael Essien and could perhaps be interested in following Mourinho to Chelsea.

Khedira initially battled Lassana Diarra for a spot in the Real Madrid starting eleven but has become a more automatic first choice this term. The former Stuttgart man moved to the Spanish giants in July 2010 and has made 124 appearances for the club over the past three seasons. 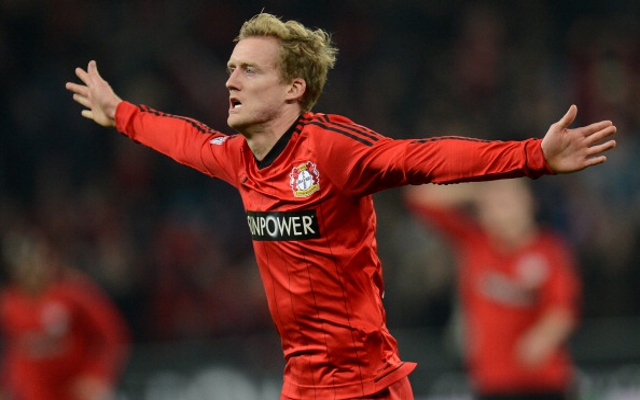 The Independent states that Chelsea are closing in on Bayer Leverkusen forward Andre Schurrle, a player who has been on the Stamford Bridge radar for some time.

The young attacker is reported to have agreed terms with Chelsea and the £20m rated forward is expected to complete a move to the club pending an agreement on a fee for the 22 year old’s services.

Some sources believe that the addition of Chelsea’s Belgian international Kevin de Bruyne into the bargain could be key though this source states that a straight cash deal may suffice.

Schurrle has had an excellent season at the BayArena this term, scoring and assisting with regularity and in the process helping his side to secure a Champions League spot for next term.