Chilean boss wants reunion with Arsenal star, whom he worked with at Villareal and Malaga.

Malaga manager Manuel Pellegrini will target a move for Arsenal midfielder Santi Cazorla if he joins Manchester City this summer, it has emerged.

The 59-year-old Chilean is expected to take over at the Etihad Stadium from Roberto Mancini, who was sacked by the Manchester City board late last night.

Pellegrini is already rumoured to be plotting a raid on Malaga, by bringing star midfield youngster Isco with him to the Premier League, in what is likely to be a big summer of spending for the club, who had a disappointing year in missing out to Manchester United for the title and a shock defeat to underdogs Wigan Athletic in the FA Cup final at the weekend.

Isco is understood to be Pellegrini and City’s main target, but with the in-demand 21-year-old also wanted by Chelsea and PSG, the new boss also wants the club to secure the signing of Arsenal’s Cazorla. 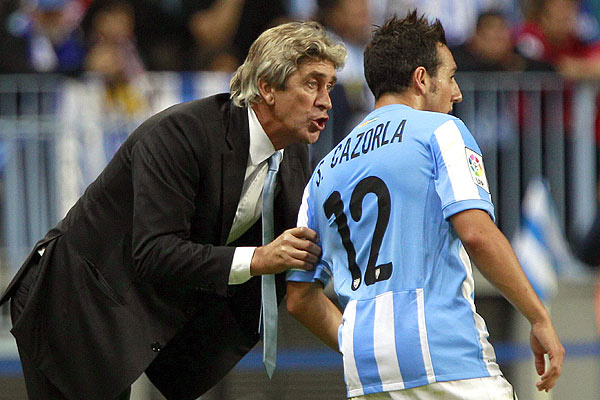 The 28-year-old playmaker worked with Pellegrini at both Villareal and Malaga, and had a good relationship with his old manager in successful spells with both clubs.

Although he only moved to Arsenal from Malaga last summer, the Gunners have a poor recent record of holding on to their best players, losing the likes of Samir Nasri and Robin van Persie to their rivals in recent years. Due to the debt that has mounted up from the club’s move from Highbury to the Emirates Stadium, they are usually prepared to listen to decent offers for their star names.

This will come as disappointing news to Arsenal fans, who have seen Cazorla settle in quickly into life in England, becoming one of the team’s best performers this season with an impressive return of 12 goals and 10 assists from midfield. However, his displays have unsurprisingly caught the attention of bigger clubs, and City would be keen to back Pellegrini’s bid to sign his former player, due to a current over-reliance on fellow Spaniard David Silva to be the team’s main playmaker.

City have been linked with other players who play a similar role, such as AZ Alkmaar’s Adam Maher, as they are keen to take the workload off Silva, who has looked tired on many occasion this season. His failure to find his best form has played a big part in City’s disappointing campaign, after he played such a big part in their title triumph last year.

Nasri, another signing from Arsenal, has failed to live up to expectations at City, and is a player who could be sold in a summer clear-out at the end of the season. Cazorla would be a like-for-like replacement for the Frenchman, with his ability to play both wide and centrally.

One consolation for Arsenal is that they should make a healthy profit from the sale of Cazorla, with City willing to pay as much as £25million for the player the Gunners brought in for around £15million.