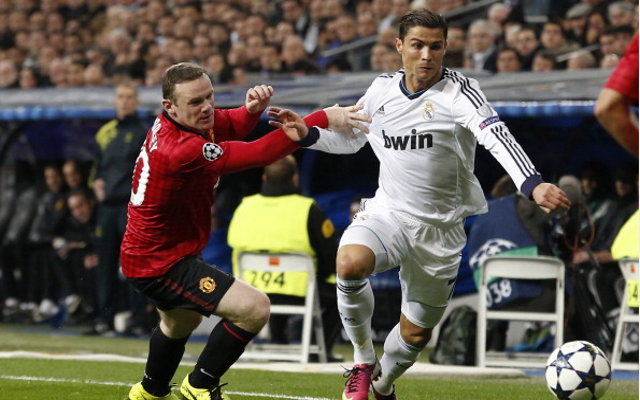 Outgoing Man United chief executive David Gill has reportedly met with Real Madrid president to discuss a possible move to re-sign Cristiano Ronaldo as well as a possible Bernabeu move for want-away striker Wayne Rooney according to Spanish source AS.

With the La Liga side said to be keen on conducting a major squad re-shuffle Perez is said to have made it clear that his side would be willing to offer up to €40m (£33m) for 27 year old England international Rooney, who has made a request to leave Old Trafford this summer.

Such interest appears to tally with talk of potential sales of both Karim Benzema and Gonzalo Higuain, both of whom have struggled to win the race to be Jose Mourinho’s first choice starting striker.

Rooney may well jump at the chance of a move to join the Spanish giants and it is worth noting that the Man United attacker stated his intention to leave the Premier League side before David Moyes was appointed as Sir Alex Ferguson’s successor, a move that will only strengthen the player’s desire to leave.

David Moyes and Wayne Rooney spectacularly fell out some years back after the former Everton player made disparaging comments about his former boss in his autobiography, which in turn led to a lawsuit filed by the Scottish boss that was settled out of court to the tune of £500k.

Gill is said to have brought up the subject of a tacit interest in bringing Cristiano Ronaldo back to Man United, four years after selling the Portuguese international to Real Madrid in a world record £80m deal. Perez apparently poured cold water on such a move stating that the club would not consider selling their prized asset.

Ronaldo has just over two years to run on his current contract and is yet to agree terms on a new deal, leading some to speculate that the Real Madrid man is planning an exit strategy.

Cristiano Ronaldo has been an astonishing success at the La Liga club, scoring a phenomenal 200 goals in 198 appearancs over the course of the past four seasons, though only collecting one domestic league and one domestic cup success in that period.