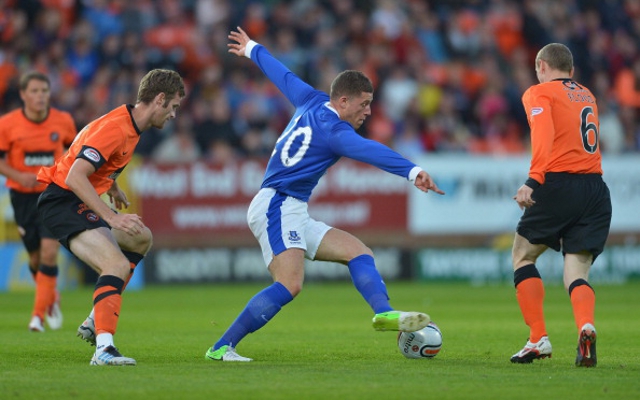 Moyes hopes to sign the talented 19 year old midfielder and is willing to fork out a fee in the region of £12m to persuade the Toffees to sell the England Under 21 international.

Everton are said to be adamant about their intention to retain the services of first team regulars Leighton Baines and Marouane Fellaini, both of whom have been strongly linked with exits this summer, but could be more amenable to the sale of Barkley to help balance the books.

Chairman Bill Kenwright knows that any managerial appointment he makes to replace Moyes will more than likely entail the new boss wanting to bring in a few new names to put their own stamp on the squad they inherit from the Scot, and as such need to cover the costs of such moves.

Barkley spent much of the season out on loan to Championship sides Leeds United and Sheffield Wednesday but has returned to the club to break into the first team set-up in recent months, earning starts against Arsenal and Tottenham.

The attack minded midfielder is considered a player with great potential and may well be the latest in a long line of young talents who have looked to leave the club to continue their career progression. Everton saw Jack Rodwell move to Man City last summer and may well elect to accept offers for Barkley over the loss of experienced first team stars, looking to secure the club’s short term future.

David Moyes handed Barkley his Premier League debut at the age of 17 and is clearly a manager who greatly rates the Everton youngster and the Liverpool born midfielder may well have his head turned by the possibility of a move to join his boss at Man United.

Barkley has made 18 appearances for Everton and is said to be contracted to the Merseyside club until the summer of 2016.