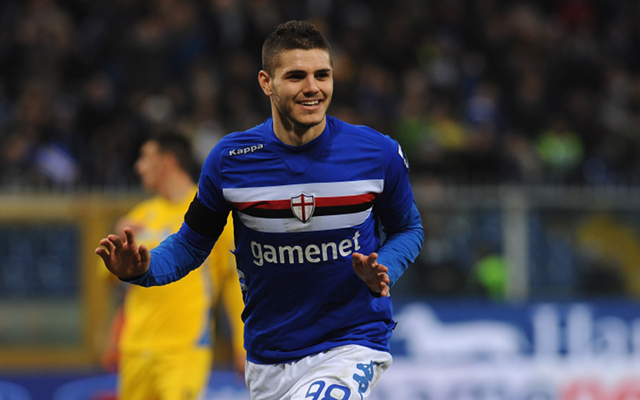 Icadi has eyes for Inter.

Sampdoria striker Mauro Icardi looks set to disappoint Manchester City this summer by spurning their advances after he declared his interest in joining Serie A rivals Inter Milan, talkSPORT reports.

The 20-year-old caught City’s eye earlier in the season when he bagged four goals in the game against Pescara and he has managed to bag 10 goals since establish himself into the first team around the festive period.

Then boss Roberto Mancini made his interest known but the club’s interest remains even though he is no longer with the team.

However, they are set to be disappointed in their pursuit as the young Argentinian has declared his admiration for fellow Italian side Inter Milan.

“I am glad to hear these stories,” he told Italian newspaper Corriere dello Sport.

“I am flattered by the Inter rumours. They are a great team with many great players from Argentina.”

“San Siro is a beautiful stadium and will remain in my memory forever.”

“I have not played there yet though. Both times I’ve gone there I have been on the bench.”

The speculation is nothing that the starlet hasn’t dealt with before. Upon leaving his native Argentina in 2008 he entertained offers from the likes of Arsenal, Liverpool, Sevilla and Real Madrid before joining Barcelona.

He spent three years with the youth teams of the Catalan club before joining Samp for a fee of just £400,000.