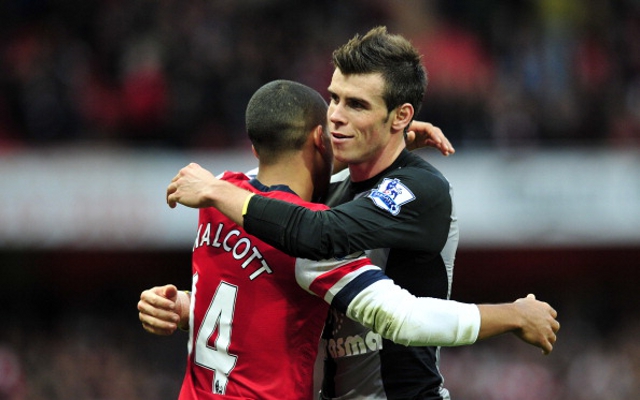 In no particular order, the best games of the 2012/13 Premier League season.

This thrilling Manchester derby on the 9th of December was when the title really started to sway in United’s direction. Wayne Rooney scored two first half goals to give his side a shock 2-0 lead at the home of the champions. City then looked to be making their comeback, scoring through Yaya  Toure on the hour mark, and then through Pablo Zabaleta late on in the 86th minute. With the game heading for a draw, Roberto Mancini witnessed a painful moment as his main transfer target of the summer, Robin van Persie, scored a stoppage time winner for United from a free kick. Samir Nasri earned much-deserved wrath after moving out of the way of the Dutchman’s shot, allowing it to creep in. Sir Alex Ferguson’s side had been beaten easily there just a few months earlier, but this special victory put his side six points clear at the top of the table and highlighted the cracks that were starting to appear in the City team.

Once again, these two sides produced a classic in the North London derby. Like last season, Tottenham scored first at the Emirates Stadium, with former Gunner Emmanuel Adebayor capitalising on some poor Arsenal defending to put the visitors in front. However, the match was soon turned on its head as Adebayor went from hero to villain. Shortly after giving his side the lead, the Togolese striker got himself deservedly sent off for a reckless challenge on Santi Cazorla, and Arsenal soon took total control. Per Mertesacker got forward to equalise with his first Arsenal goal – a fantastic header, and then the floodgates opened.

Arsenal found themselves 3-1 up and in control before half time, with further goals from Lukas Podolski and Olivier Giroud. Arsenal continued to dominate in the second half, going 4-1 up on the hour mark with Cazorla finishing a fine flowing move. A fine individual effort from Gareth Bale made it 4-2 and surprisingly nervy for the Gunners, as their defensive frailties were exposed. Spurs missed some good chances to make it a real contest, and eventually Theo Walcott put the game to bed in the final minute to make it 5-2, the same score as last season, and an equally breathtaking game.

Arsenal 5-2 Tottenham all goals and highlights 17.11.12 by Georgi Amsiss

This game owes everything to the very best and very worst of Luis Suarez. Before the game, interim Chelsea boss Rafael Benitez was given a warm reception by his old fans at Anfield. With Chelsea chasing a Champions League place, they scored a crucial first through Oscar, who headed home a corner in the 26th minute. The visitors led at the break, but seven minutes into the second half is when the game started to spark into life. Suarez played an exceptional first-time ball to Daniel Sturridge, who slotted home an equaliser against the side he left in January.

Just five minutes later, Suarez’s stupidity in his own box led to Chelsea getting a penalty after his needless hand ball. Eden Hazard coolly converted the spot kick and the Blues were in front again. Shortly afterwards, Suarez was again the centre of attention as he bizarrely bit Chelsea defender Branislav Ivanovic when the two were wrestling for the ball in the penalty area. Chelsea were furious as the referee seemed to miss the incident, and Suarez was very fortunate to avoid a red card. He then inflicted more misery on the visitors, as he stayed on to head home an equaliser for Liverpool in the very last attack of the game. Incredible drama at Anfield, albeit for the wrong reasons at times.

Newcastle are often on the wrong end of Premier League classics, and this is another perfect example. Alan Pardew’s side remarkably led three times at Old Trafford but went on to lose the game. Perch scored for the visitors after just four minutes, before Jonny Evans equalised for United. The very same player then put through his own net just three minutes later to give Newcastle the lead again. Patrice Evra equalised just before the hour mark, but Papiss Cisse scored a fine goal just ten minutes later to make it 3-2 to the Magpies. That lead lasted three minutes as Robin van Persie made it 3-3. As the game headed into stoppage time Newcastle looked at least like scraping a draw, before Javier Hernandez steered home a late winner for the home side. A good example of United’s dodgy defending on occasion this season, but also of their great attacking ability and willingness to fight til the end for results.

This was a game of exceptional technical quality, as the two sides put some wonderful attacking football on show at the Etihad Stadium. Edin Dzeko gave City the lead finishing off a neat move, before Daniel Sturridge fired home a low and powerful strike just six minutes later. In an even game, Steven Gerrard perhaps deservedly fired Liverpool ahead with a trademark dipping and swerving half volley from outside the box – a goal of the season candidate for sure from the Reds skipper. Again the lead did not last long as Sergio Aguero scored another excellent, but very different goal at the other end. The Argentine striker was forced wide by Liverpool goalkeeper Pepe Reina, but that didn’t stop him from squeezing in an exquisite chip from the tightest of angles. This was great entertainment for the neutral, but it left Roberto Mancini’s side nine points behind leaders Manchester United.

This great comeback by Tottenham looked to be a big result that would help them towards the top four. Spurs were in the middle of a difficult patch, but took the lead at Upton Park through Gareth Bale. However, they were in trouble as Andy Carroll equalised from the spot in the 25th minute. Things got worse on 58 minutes as the Hammers’ new signing Joe Cole gave the home side the lead and looked to be condemning Spurs to another poor result. However, they were given hope with fifteen minutes to go, as Gylfi Sigurdsson stabbed home an equaliser for the visitors. Still, with time ticking away the game looked sure to be heading for a draw, before PFA Player of the Year Bale showed why he is one of the biggest talents in the world with a stunning long range strike to win the game in stoppage time. It was not the first or last time that Bale’s immense quality would decide a game this season, and this was one of his many goal-of-the-season contenders, a list he could occupy all by himself.

Despite the big scoreline, this was a close game for the most part, as Newcastle caused real problems for Arsenal at the Emirates, continuing to peg them back until a late flurry of goals from the Gunners. Theo Walcott was on fire that night, and opened the scoring on 20 minutes with a Thierry Henry-like goal. Demba Ba then equalised just before half time with a deflected free kick. Alex Oxlade-Chamberlain scored a fine goal after the break to put the home side back in front, but this time the lead lasted only nine minutes as Sylvain Marveaux capitalised on some poor Arsenal defending to tap the ball home.

Five minutes later, it was 3-2 to Arsenal as Lukas Podolski headed in a scrappy goal on the line. Another five minutes passed before there was yet another goal from Newcastle, making it 3-3 with Demba Ba finishing a fine Newcastle move. This time just four minutes passed before Walcott scored his second of the night to make it 4-3. From this point on it was all Arsenal, as they ran riot with three goals in the last five minutes of the game. Substitute Olivier Giroud scored twice, one a fantastic diving header, and Walcott completed his hat trick with a solo run and cool chipped finish in stoppage time to give the game a crazy 7-3 scoreline.

Three goals in a crazy three minute spell decided the outcome of this game. Incredibly, Spurs found themselves 2-0 up at half time at a ground that they had not won at for 23 years. Jan Vertonghen scored a scrappy opener after just two minutes, before Gareth Bale scored a stunning second, running almost half the length of the pitch before slotting home with his right foot. United were in trouble, but you can never rule them out of getting a comeback, and it looked on when Nani stabbed home on 51 minutes. Then the comeback was off on 52 minutes when Clint Dempsey finished off another fine Spurs move. Then the comeback was on again on 53 minutes when Shinji Kagawa slid home for United. However, that was the end of the scoring and Spurs did well to hold on for a memorable result, ending their long Old Trafford hoodoo.

Another fine game of twists and turns involving Spurs. This early-season encounter was a thriller that ensured that this Premier League season would be as entertaining as the last. Gary Cahill gave Chelsea a half time lead, volleying home an excellent strike from a corner in the 17th minute. Spurs turned the game around at the start of the second half, with former Blues defender William Gallas making it 1-1 in the 47th minute, and Jermain Defoe firing home to give them a 2-1 lead in the 54th.

However, Chelsea showed great resilience and made a quick comeback of their own; Juan Mata equalised in the 66th minute and was the hero again just three minutes later as he scored a fine goal to make it 3-2 at White Hart Lane. Spurs pressed for a third, but were caught on the break late on as Daniel Sturridge tapped home to make it 4-2. This looked like an early example of Chelsea’s title credentials, taking them to the top of the league after a great start to the season.

Quite fittingly, Sir Alex Ferguson’s last game in charge was a thrilling high-scoring affair. However, the legendary boss will have been disappointed not to finish with a win, as his side roared into a 3-0 lead, scoring twice in the first ten minutes through Shinji Kagawa and a Jonas Olsson own goal. Alexander Buttner then finished a fine move with an emphatic finish to make it three after just half an hour, as United looked to be turning on the style in Ferguson’s final game. James Morrison pulled one back shortly before half time, though it didn’t look like having a major impact on the game. However, when Romelu Lukaku made it 3-2 on 50 minutes it was game on.

This seemed to spark United into life and they scored twice in ten minutes through Robin van Persie and Javier Hernandez to make it 5-2 and surely game over this time. However, the drama wasn’t over, as West Brom scored three goals in the last ten minutes. First Lukaku scored another to make it 5-3, Mulumbu made it 5-3, and Lukaku completed a fantastic hat trick in his last game for the club to make it 5-5. It was a deserved result for Steve Clarke’s side, who have performed above expectation for much of the season, and who provided great entertainment on the final day of the season, equaling Arsenal’s 7-3 win over Newcastle as the highest scoring match of the 2012/13 campaign.