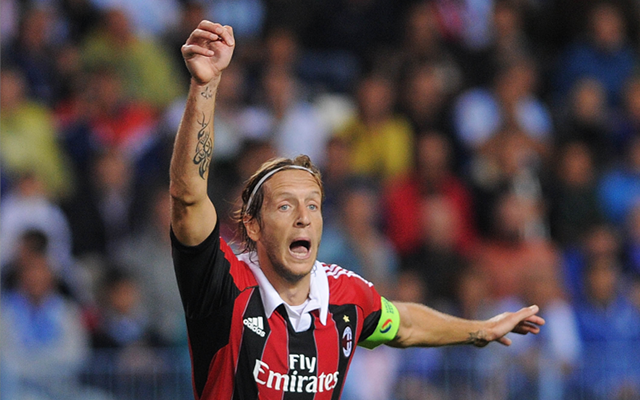 AC Milan captain Massimo Ambrosini has fuelled talks of a move to West Ham this summer after being spotted getting off a plane at Stanstead Airport, talkSPORT reports.

The 35-year-old is out of contract at the San Siro next month and he had been on the radar of a number of MLS sides including LA Galaxy and Chicago Fire, but news broke last week that he was a target for Hammers boss Sam Allardyce.

The manager is keen to add extra man power to his midfield this summer as Gary O’Neill is expected to move on and the former Italian international is believed to be keen to test himself in the Premier League before hanging up his boots.

And he has now apparently opened the door to a move to the Hammers after being spotted boarding off a plane at Stanstead Airport and posing for photographs with the club’s fans.

Ambrosini is almost certain to end his 18-year association with Milan when his contract expires and he signed off in his final game for the club by being sent off against Siena.

The veteran midfielder began his career at Cesena before Joining Milan in 1995. He spent a season on loan with Vicenza soon after joining and has gone on to make over 550 for the Serie A giants.