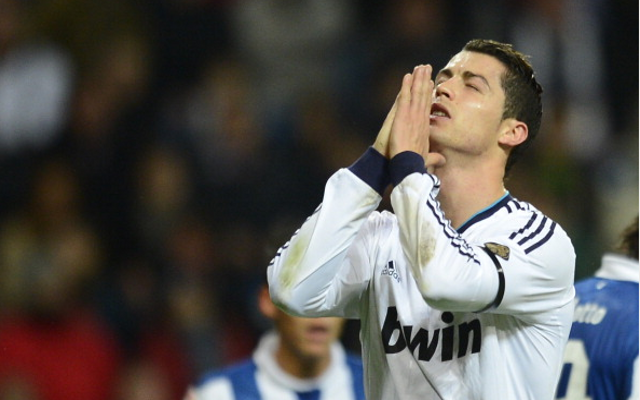 Stamford Bridge side linked with mammoth move to bring in Bernabeu attacker.

Chelsea are reportedly leading the chase to sign Real Madrid goal machine Cristiano Ronaldo according to the Daily Mail.

Former Bernabeu president Ramon Calderon suggests that the 28 year old Portuguese international may follow Jose Mourinho to Stamford Bridge and states that a return to Man United is unlikely due to the massive fee needed to persuade the Spanish giants to consider selling their prized asset.

Ronaldo is said to have grown disillusioned with life at the La Liga side and Calderon appears to be looking to discredit current president Florentino Perez stating;

‘Ronaldo said he was sad at the beginning of the season. I think the relationship with the current president is not a good one, maybe because the president doesn’t like the players he inherited.’

Calderon cites three clubs he feels have the financial power to lure Ronaldo away from Real Madrid, Chelsea, PSG and Man City and this source believes of those alternatives a move to West London to reunite with Mourinho is the most likely.

Though Ronaldo’s time at Real Madrid hasn’t garnered a great deal in the way of silverware there is no denying the impact he has made at the club.

The former Man United man has scored an astonishing 201 goals in 199 appearances for Real Madrid since his £80m move from Old Trafford but has just one La Liga title and a Copa del Rey success to show for his efforts.

Roman Abramovich would surely be tempted by the prospect of welcoming a Mourinho/Ronaldo dream team at Stamford Bridge and would be well aware of the kind of statement of intent that such a coup would create, helping to erase the memory of a poor season as well as bridging the gap between Chelsea and Premier League title front-runners Man United and Man City.