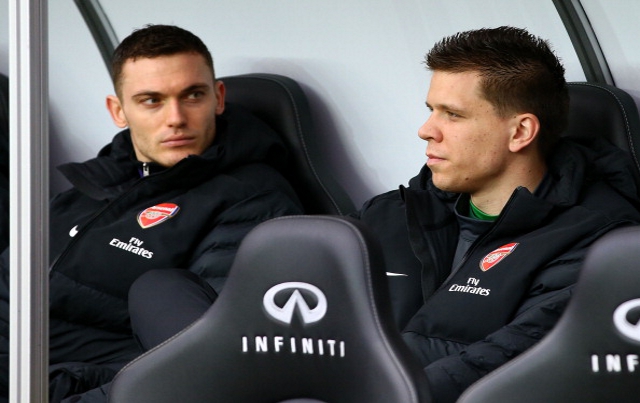 Man United are said to be monitoring developments at the Emirates Stadium closely ahead of a possible summer bid for Arsenal captain Thomas Vermaelen according to the Daily Mirror.

The 27 year old defender has been frozen out of the Gunners first team starting eleven after a very indifferent campaign and Arsene Wenger is apparently ready to listen to offers for the Belgian international though one wonders if the idea of selling another player to Man United, after controversially allowing Robin Van Persie to move to Old Trafford, is a move the North London club are willing to accept.

The usually sound performer Vermaelen has had a woeful campaign and statistics show that Arsenal do produce better results without the former Ajax man involved. Indeed Wenger’s side didn’t suffer defeat in any of the nine fixtures that the skipper missed and Laurent Koscielny alongside giant German Per Mertesacker is certainly the strongest central defensive partnership in the club’s armoury.

Though Vermaelen is sometimes used in a left-back role this is also less relevant since the January signing of Spaniard Nacho Monreal, who has been most impressive since his move from Malaga to the Premier League.

With Rio Ferdinand not getting any younger and Nemanja Vidic repeatedly out with injuries David Moyes may well be looking to bring in another central defender, not least because Phil Jones and Chris Smalling may actually both be suited to alternative positions, though it should be noted that Jonny Evans was one of Man United’s most consistent performers in 2012/13.

Vermaelen is however keen to stay at Arsenal and doesn’t want to uproot his young family but presumably the prospect of warming the Arsenal bench is also not one he is going to be happy with either.