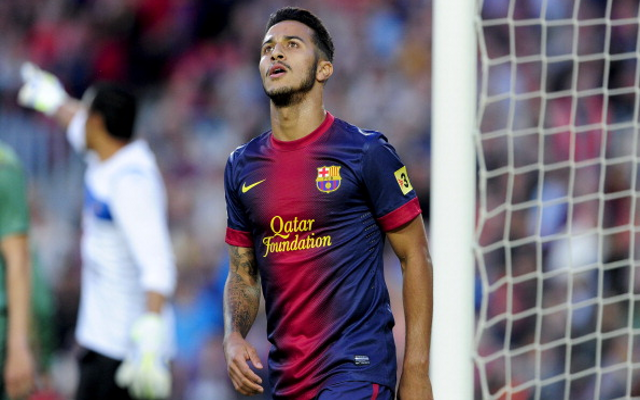 Manchester United will bid around £15million to bring Barcelona midfielder Thiago Alcantara to the club this summer, according to Marca.

The 22-year-old is one of many fine young players to have come through the club’s La Masia youth system, though he has struggled to gain a first team place due to the vast competition ahead of him.

Alcantara has been unable to work his way past Xavi, Andres Iniesta and Cesc Fabregas, and may have to look for a move elsewhere to fulfill his enormous potential and progress in his career.

The midfield playmaker, who has three caps for the senior Spanish national team, has been linked with United before, as well as other clubs, and the Red Devils are now ready to step up their interest in him as they seek a player of his kind to replace the retiring Paul Scholes.

Other attacking midfielders have been linked with the club, such as Benfica’s Nemanja Matic and even Alcantara’s Barcelona team-mate Fabregas, formerly of Arsenal.

Juventus’ Claudio Marchisio is also said to be a main target, though he would cost closer to £30million, and United may favour a cheaper move due to the release clause in Alcantara’s contract.