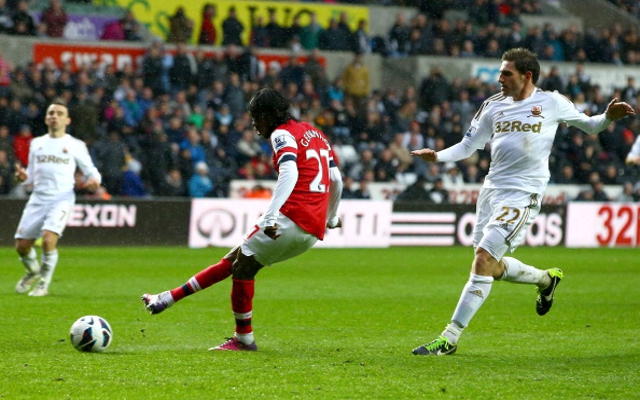 Arsenal forward Gervinho could leave the club on loan this summer, as reports in France suggest he is being offered by the Gunners to several Ligue 1 sides.

According to Le10Sport, Lyon are currently leading the chase for the temporary signing of the Ivorian, who has not managed to settle in to English football since joining from Lille two years ago.

The 25-year-old has only managed ten goals and ten assists in two seasons at the Emirates Stadium, and is unpopular with a large section of Arsenal fans due to his strange decision-making and poor finishing skills.

Lyon were linked with a £12million move for Gervinho earlier this week, and Galatasaray have also shown an interest, though it seems Arsene Wenger does not want to give up on the player just yet, and will want him to return to the club at the end of next season.

Gervinho may not be the only player on the way out of Arsenal this summer, with several other under-performers widely tipped to be being shown the door to make way for new faces to improve the squad.

The Ivory Coast forward could be joined in France by Marouane Chamakh, who has had an even worse time since moving to Arsenal from Ligue 1 in 2010, and is said to be a target for his former club Bordeaux.