Chelsea are closing in on a deal to sign Napoli striker Edinson Cavani with Blues owner Roman Abramovich sanctioning the inclusion of Fernando Torres in part exchange for the Uruguayan international.

Abramovich is keen to bring in a ‘Marquee’ signing this summer and has set his sights on Serie A hot-shot Cavani following lengthy discussions with Chelsea’s technical director Michael Emenalo and incoming boss Jose Mourinho, both of whom have given their backing to advances for the 26 year old striker.

Napoli have brought in Rafa Benitez to replace Inter Milan bound boss Walter Mazzarri and Abramovich will hope to use this connection to help win the race for seemingly exit bound Cavani.

The former Palermo forward has been a massive success at the San Paolo, scoring 104 goals in 138 appearances for Napoli, helping them to a second place finish in Serie A, the club’s highest placing in over 20 years.

Roman Abramovich is ready to offer €40m (£34m) plus Fernando Torres in a tempting bid that could well meet with the approval of Napoli’s eccentric owner Aurelio De Laurentiis. 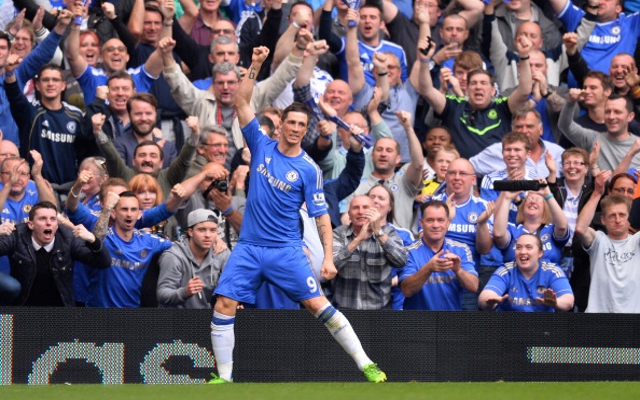 Rafa Benitez could well be tempted by the possibility of reuniting with Torres for a third time, having doggedly stuck with the Spaniard during his interim stint as Chelsea boss. Abramovich will look to sell the 29 year old and sees the chance to use the former Liverpool man as a makeweight as the ideal way of making the most of a failed £50m investment.

Torres struggled for form in the Premier League this season but did manage to net 23 goals in all competitions, including a crucial opener in the Europa League final earlier this month.

Real Madrid and Monaco are also said to be tracking Edinson Cavani but Chelsea will hope to see off the competition as they look to lure the prolific Serie A striker to West London as the spearhead of a Blues attack Abramovich’s hopes can mount a genuine challenge for major honours next term.