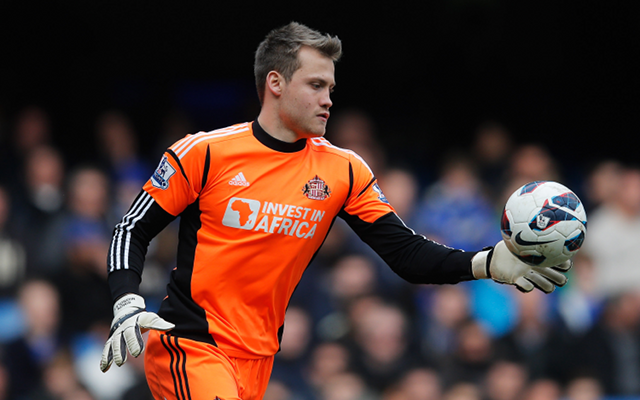 Arsenal manager Arsene Wenger has made Sunderland goalkeeper Simon Mignolet his prime candidate to replace the struggling Wojciech Szczesny, and according to the Daily Mirror the Gunners are set to win the race to sign the talented custodian.

The Belgian shot stopper has been a stand-out performer for the Black Cats this season, despite their fight with relegation, and will cost the Gunners around £10million.

The 25-year-old is keen to move on to a bigger club after a disappointing campaign at the Stadium of Light, and was also linked with a move to Serie A side Napoli.

However, he will now remain in the Premier League with Arsenal, who have been linked with a number of goalkeepers in recent months following a difficult season for current first choice Szczesny.

The Pole has made a number of high-profile individual errors this season, and was dropped to the bench for five games for backup ‘keeper Lukasz Fabianski.

The 23-year-old was then back in the team after Fabianski got injured, and seemed to improve in the final few games of the season, though it is still thought that Wenger would like a more reliable option to be brought in this summer.

The likes of Barcelona’s Victor Valdes and Stoke City’s Asmir Begovic had been linked, but Mignolet now seems to be the preferred choice of the French manager.