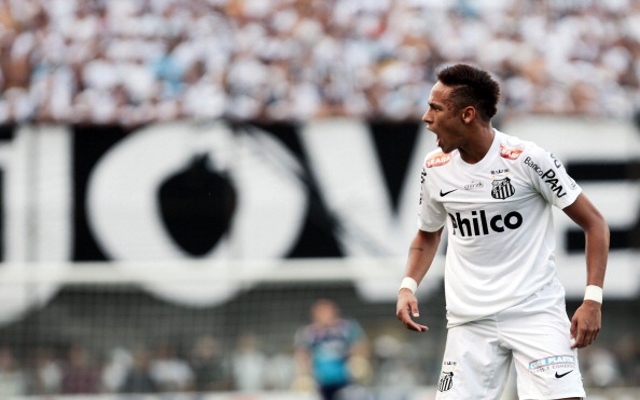 “On Monday, I sign a contract with Barcelona. I want to thank the Santos fans for nine incredible years,” wrote the 21-year-old.

Santos had received offers for Neymar from both Barca and Real, according to Spanish newspaper El Pais, quoting the club’s vice-president. Barca confirmed the move on Sunday.

“FC Barcelona and Santos FC have agreed to terms for Neymar da Silva Junior. The Brazilian forward will don the Blaugrana strip for the next five seasons,” said a statement on the club’s website.

Despite his tender age, Neymar has been a first-team regular for Santos for the past four years, scoring 156 goals and providing 77 assists in 256 matches.

In 2011, he guided them to their first Copa Libertadores triumph since when Pele represented the club in the 1960s, and he has already established himself at international level, scoring 20 times in 32 appearances with Brazil.

“It’s a different moment for me, sad (bidding farewell) and happy (new challenges),” he wrote.

Neymar plays his last game for Santos on Sunday against rivals Flamengo, at the opening of this year’s Brazilian football season.

“I want the chance to enter the field one more time… and hear the fans cry out my name,” he wrote.

The young star, who often sports a Mohawk haircut, is a native of Sao Paulo. Youths ask barbers for “a Neymar” when they go for a haircut, and young women scream and chase after him as if he were a rock star.

Brazil lacks the megastars of yesteryear such as Ronaldo, Ronaldinho and Robinho, and the country’s hopes for winning the World Cup in 2014 — to be held in Brazil — rest on the young prodigy’s shoulders.

Time magazine described Neymar in February as “the future Pele,” while the US magazine Sports Pro chose him for the second year running as the sports personality with most worldwide marketing potential, ahead of Argentina’s Lionel Messi and Northern Irish golfer Rory McIlroy.

Off the football pitch, Neymar’s face is omnipresent: he’s constantly being interviewed on TV, appears in scores of ads and on websites, and his personal life is feverishly covered by the celebrity press.

Fans are avid to find the latest news about Neymar and his young son, or the star’s latest girlfriend, in this case TV starlet Bruna Marquesina. Their courtship was announced at the latest Rio carnival.