Speculation is rife that incoming Man United boss David Moyes will look to strengthen his Old Trafford midfield as a matter of some urgency, with a number of reported targets on the Scot’s wish-list.

Moyes is strongly linked with a £25m move for Barcelona midfielder Cesc Fabregas according to the Daily Express.

This source claims that the former Everton boss will look to reunite former Arsenal team-mates Fabregas and Robin Van Persie this summer as he looks to beef up a midfield that has lost the services of Paul Scholes, who has retired for a second time.

With Darren Fletcher’s future unsure following illness and Anderson still failing to deliver on his obvious potential there is certainly scope for a midfield addition and one with an attacking mentality could be high up on the list of Moyes’s priorities this summer.

Fabregas has been a regular in the Barcelona first team this season but was tellingly left out of some of the Nou Camp side’s pivotal fixtures this term, including crucial Champions League fixtures against Bayern Munich and AC Milan. 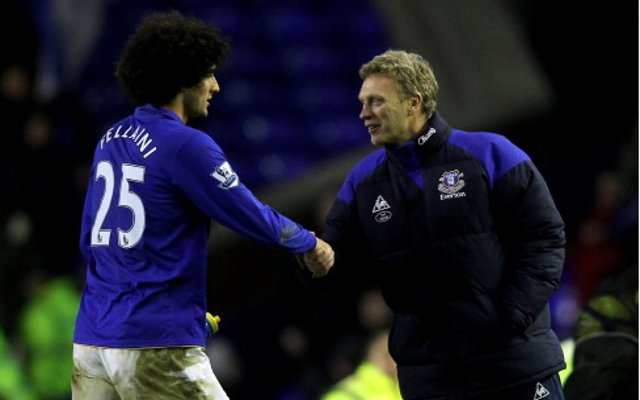 The Daily Mirror suggests the likelihood that Moyes’s first signing of the transfer window may see him raiding his former Goodison Park side to bring in Belgian powerhouse Marouane Fellaini.

This source states that Moyes will conduct a raid that will see Man United trigger the 25 year old’s £24m release clause, a move that the Everton midfielder is surely likely to be tempted by.

After five seasons at Everton Fellaini may feel he has gone as far as he can with the Merseyside outfit and could rightly believe that his Champions League ambitions are unlikely to be met at the club.

The chance to reunite with the manager who brought the former Standard Liege man to the English top tier may be very hard to turn down.