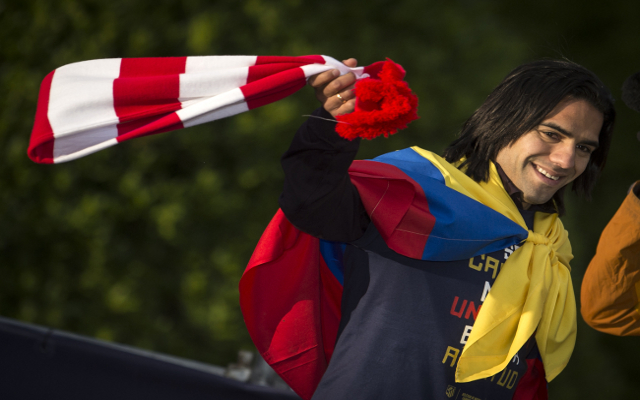 Monaco have agreed a French record fee of €60m (£51m) to sign Atletico Madrid striker Radamel Falcao according to the Daily Mail.

Falcao, 27, won the 2012 Europa League and has netted 28 goals this season for Atletico, whom he also helped to glory in the Spanish Copa del Rey.

The Colombian international initially made his name in Europe with Portuguese club FC Porto, helping them win the Europa League in 2011 before moving to Atletico for a reported fee of 40 million euros.

Meanwhile, Carvalho, 35, will not cost Monaco anything as he is out of contract with Real Madrid, having hardly featured this season.

Carvalho played in the Porto team that beat Monaco 3-0 in the Champions League final in 2004.

Valdes, 31, had initially been expected to arrive in the Mediterranean principality on Monday but his current club Barcelona are yet to finish their season and he took part in their training session on Tuesday.

Valdes has a year remaining on his contract at the Camp Nou but announced in January that he wanted to leave for a new challenge elsewhere after spending his entire career to date in Catalonia.

However, his agent, Gines Carvajal, is believed to also be weighing up an offer from a Premier League club.

Monaco’s reemergence as a major power in the French game has come since Russian billionaire Dimitri Rybolovlev – the world’s 100th-richest man according to Forbes magazine – bought the club in December 2011.

Their Russian sporting director, Vadim Vasilyev, has been given carte blanche to spend big since their promotion to Ligue 1 was sealed recently and last Friday they announced the double signings of James Rodriguez and Joao Moutinho from Porto for a combined fee of 70 million euros.

However, Vasilyev has sought to play down expectations in an interview with L’Equipe.

When asked if his team could compete for the Ligue 1 title next season, he said: “No, no…PSG have a great team. There are others too like Lyon, Marseille, Bordeaux, Lille…It will be difficult. It is still too early to envisage being French champions.”

On the club’s transfer policy, and despite the huge sums already spent, Vasilyev added: “We don’t want to pay more than the market price. If we give the impression that we can spend without counting, it’s not the case.”

Indeed, doubts have been raised as to how they can sustain such a policy as UEFA seeks to implement its Financial Fair Play (FFP) rules, which encourage clubs to live within their means, only spending money they earn rather than living off donations from wealthy owners.

Monaco are one of the most successful clubs in French football history, with seven league titles to their name, but FFP looks set to pose a serious problem to a club whose average attendance this season was just 5,295.

Even when they reached the Champions League final in 2004, their average domestic gate that season was just 10,394.

“These are the rules, so we must follow them,” Vasilyev told L’Equipe. “But to begin a project, you need to be able to invest in order to make a profit afterwards.”

Monaco also currently benefit from the favourable tax laws in place in the principality.

Foreigners playing for the club do not pay income tax, while French players have paid less in national insurance contributions than they would at other clubs in France.

However, a decision taken in March by the French football league (LFP) means Monaco will be subject to the same tax laws as other French clubs from June next year.