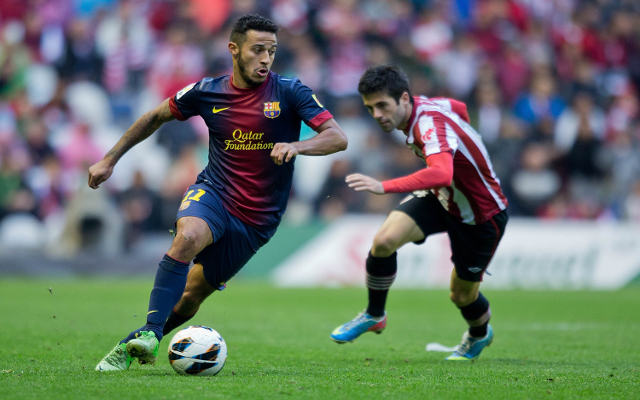 Midfield ace refusing to be drawn into gossip.

Barcelona midfielder Thiago Alcantara has distanced himself from the rumours linking him with a move to Manchester United this summer, Sky Sports reports.

The 22-year-old has been strongly linked with a move to Old Trafford in recent weeks, but has decided to put all speculation behind him until he returns from the upcoming European under-21 Championships.

“I just live my life and I am very happy,” the Spanish international told reporters.

“I enjoy it in Barcelona because I have lived through some great times but we will see what happens after the Euros.

“Any player is used to living with rumours about him and they just cannot affect you.”

He is believed to have a buy out clause in his contract that has dropped from a reported €90 million to €18 million having failed to play 30 minutes or more in 60 per cent of Barca’s games this season.

His international teammate David de Gea has also weighed in by saying that he hopes to see his friend at the Manchester club next season but Alcantara was coy and keen to bat the compliment back.

“All players want the best players in their team. I could say I hope that he comes to Barca in the same way he says things about me,” he added.

“I just think he was having a bit of fun and not too much should be read into it.”