Stamford Bridge return only a matter of time…

It appears that the official Premier League website may have gotten ahead of itself this morning, publishing a story outlining Jose Mourinho’s return to Stamford Bridge a little too early. 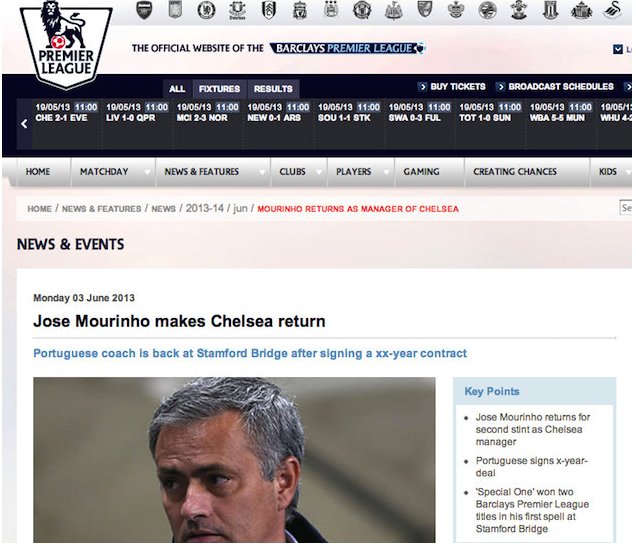 The page was swiftly removed but not before a huge number of readers had noticed.

Jose Mourinho took charge of his final Real Madrid match on the weekend, a 4-2 home win over Osasuna, and was greeted by a mixture of boos and cheers and the 50 year old was very keen to make clear his appreciation to the Bernabeu side’s ‘Ultras’ who had sung his name throughout the match.

This season has been a long, arduous and difficult one for Mourinho, culminating in a lack of any silverware though did see the Spanish giants reach the Champions League semi-finals for a third year running as well a Copa Del Rey final.

Chelsea’s faithful will be eagerly awaiting official confirmation of Mourinho’s return to Stamford Bridge, which is surely imminent, and Roman Abramovich will hope that the former Blues boss can once again take the West London side to the top of the Premier League.