Arsene Wenger hopes to lure midfielder to the Emirates Stadium.

Arsenal will look to see off competition from Man United as Arsene Wenger pushes on with efforts to lure PSV Eindhoven midfielder Kevin Strootman.

CaughtOffside understands that while Man United have long been tracking the young Dutch international they have as yet not made an official approach for the 23 year old, which could leave the door open for the North London side.

Wenger is scouting a number of targets this summer as he set about strengthening potential areas of weakness in his Arsenal squad and feels the need to bring in a central midfielder who can add some bite to his first team set-up. This is perhaps in view of the fact that the Arsenal manager has not replaced Alex Song since he left to join Barcelona last summer.

Another long term injury to Abou Diaby has seen Wenger step up interest in a strong midfield signing and the likes of Celtic’s Victor Wanyama and Toulouse’s Etienne Capoue are also on the Gunners radar. 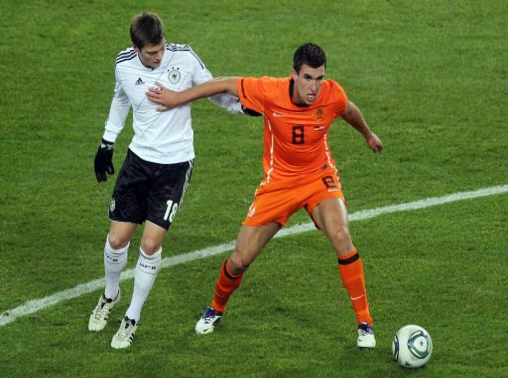 However Strootman is said to now be Wenger’s first choice to fill the role and the French boss is ready to meet the Eredivisie side’s reported €20m (£17m) price-tag and is in advanced talks ahead of a bid for the former Utrecht midfielder.

Strootman has enjoyed two consistent seasons at the Philips Stadion but having seen Ajax secure the title in both campaigns the powerful battler is said to be ready to leave the Dutch top tier in search of a high-profile move.

Having secured a Champions League berth for next term Arsene Wenger will be buoyed by a more significant transfer war-chest, said to be in the region of £70m, and is ready to make significant moves in the transfer window in order to bring additions that can help his side challenge for major honours in the hope of ending their eight year silverware drought.

Kevin Strootman is currently away on international duty representing the Dutch national team at the European Under 21 Championships in Israel.