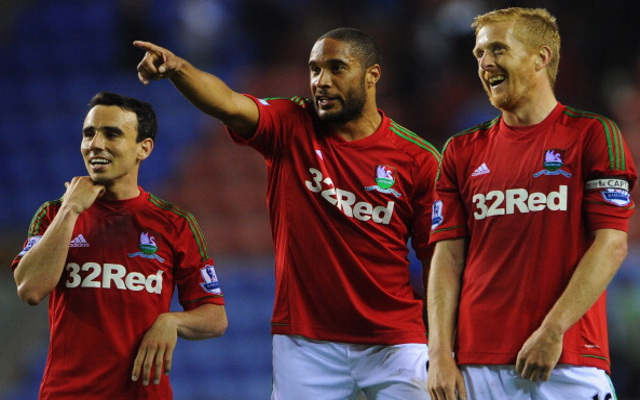 New Manchester United manager David Moyes will compete with Arsenal and Liverpool for the signing of Swansea City defender Ashley Williams, it has emerged.

The Scot, who will take charge at Old Trafford this summer after eleven years at Everton is set to be given a sizable transfer budget to spend as he takes on the unenviable job of replacing the legendary Sir Alex Ferguson.

He inherits a title-winning team at United, though one with a leaky defence that conceded a worryingly high 43 goals, the worst defensive record in the top four. With Rio Ferdinand aging and Nemanja Vidic having a recent struggle to stay fit, an addition at the back is said to be a priority for the incoming boss.

Williams has impressed for the Swans this season, helping them to a top-half finish as well as silverware in the Capital One Cup, and manager Michael Laudrup has admitted it will be difficult to keep him after his fine form.

The Dane also suggested that he is aware that he will need to sell players before he can spend money on bringing new signings in, giving hope to the likes of Arsenal and Liverpool who have also been showing an interest in Williams.

The Gunners are keen to bring in a replacement for the out-of-form and out-of-favour Thomas Vermaelen, and see Williams as a prime target who is also within their price range of between £8million and £10million. Vermaelen’s availability has also, coincidentally, alerted United, who also signed Robin van Persie from Arsene Wenger’s side last summer.

Liverpool’s interest in Williams may have cooled following the signing of Kolo Toure from Manchester City, though they are still facing the prospect of bids coming in for Daniel Agger, a target for Napoli and Monaco, meaning they could still come in with an offer for the Swansea captain.

However, United are now keen to jump to the front of the queue for the Welshman, and will offer the club’s asking price of £10million to bring him to Old Trafford.

Adil Rami of Valencia had also been a target for United, though they now fear losing out to rivals Manchester City in a bidding war, and Moyes is also thought to have expressed a preference for a player with Premier League experience, making Williams a prime candidate alongside Vermaelen.

Arsenal will not want to sell to United for a second summer in a row though, meaning they would raise their asking price of £5million if Moyes came calling, preferring to shift him to other suitors such as Barcelona.

Williams has not ruled out a move to a bigger club after hearing of Arsenal and Liverpool’s interest, and would surely welcome the chance to join the current Premier League champions.