Italian source TuttoMercato claim that Jose Mourinho is keen to sign two of his former Inter Milan charges as he sets about bringing in additions to improve his Chelsea squad.

The 50 year old Portuguese boss is sure to be handed a hefty transfer fund by Russian billionaire Roman Abramovich as the owner looks to appease Chelsea fans dismayed by a pretty poor season last term, one that saw the West London club make no impact on the Premier League title race as well as falling at the first Champions League hurdle.

Mourinho is keen to reunite with Dutch playmaker Wesley Sneijder, who only moved from Inter Milan to Galatasaray in January, but did then impress as the Istanbul side won the Super Lig title and made it through to the Champions League quarter-finals.

The 28 year old flair player still enjoys a strong relationship with Mourinho, and the pair enjoyed a great deal of success in the one season the two were at Inter Milan, during which the San Siro side won the Serie A, Coppa Italia, Champions League treble. 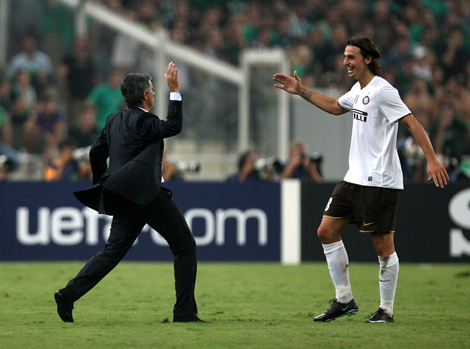 Mourinho is also interested in PSG forward Zlatan Ibrahimovic, another player he knows well from his time as Nerazzurri boss, with a view to the Swedish international being the ideal prolific source of goals the Blues could well do with bringing in.

This source claims that Chelsea would be willing to sacrifice Fernando Torres in a move to tempt PSG into selling but one wonders if such an offer would really grab the Ligue 1 big spender’s attention.

Ibrahimovic has gone from strength to strength in recent seasons, scoring 56 goals in two seasons at AC Milan and then racking up 35 goals in all competitions with PSG last term.

Jose Mourinho has an array of creative midfield talent with the likes of Juan Mata, Oscar and Eden Hazard providing plenty of invention but without a regular goal-scorer to provide an end product Chelsea may struggle to convert draws to wins and then lose ground on the front-runners.

Fernando Torres has been a colossal flop, certainly in terms of his efforts at Premier League level, and Demba Ba has proven something of a disappointment since his January move from Newcastle United. Jose Mourinho may well elect to bring in Romelu Lukaku back to the first team fold after his successful loan spell at West Brom.