A number of sources have today claimed that Man United’s official website jumped the gun and announced the signing of Borussia Dortmund striker Robert Lewandwoski, see screenshot below. 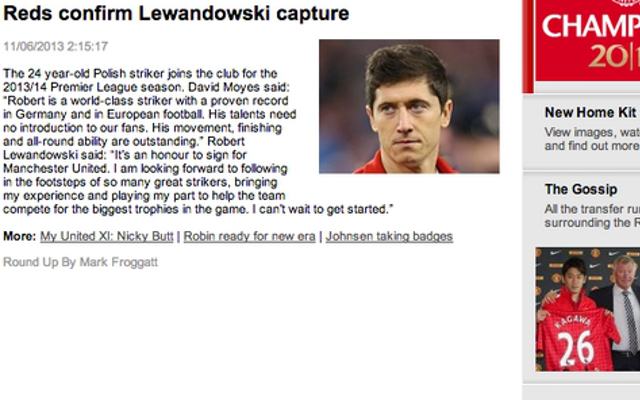 This was originally reported on Irish site Joe.ie but it may well prove to be an elaborate hoax but does come at a time when there is much speculation about the Polish international.

Borussia Dortmund have publicly stated they would not sell their star striker to Bundesliga rivals Bayern Munich and could therefore elect to sell to a side outside the German top tier, knowing that in twelve months time Lewandowski can leave the club on a free transfer when his current contract comes to an end.

Lewandowski has scored 66 goals over the course of the last two seasons and is considered one of the most feared strikers in Europe. Jurgen Klopp has already seen Mario Gozte move to the Allianz Arena and is no doubt keen to avoid further improving Pep Guardiola’s squad this summer.

David Moyes may well be considering the signing of a new striker given that Wayne Rooney has reportedly made a verbal request to leave Old Trafford.