There are signs that Wesley Sneijder is getting back to his best, and on his day there are few better midfielders in the world than the Dutchman with his wonderful passing and vision and excellent long-range shooting technique.

He started his career as one of the brightest prospects coming out of the Ajax youth team, and became a regular in the team when he was just 18 years old. His creative ability from a variety of attacking midfield positions made him a highly influential player almost straight away, and with a highly impressive haul of 22 goals and 12 assists in his final season with the club in 2006/07, he was snapped up by Spanish giants Real Madrid for £23million.

Despite a decent first season at the Bernabeu with 9 goals and 9 assists, Sneijder was not a regular in the side in the following season, as he for no apparent reason fell out of favour at the club. It was their loss though, as Serie A giants Inter Milan obviously saw his great potential, signing him for just £12million. 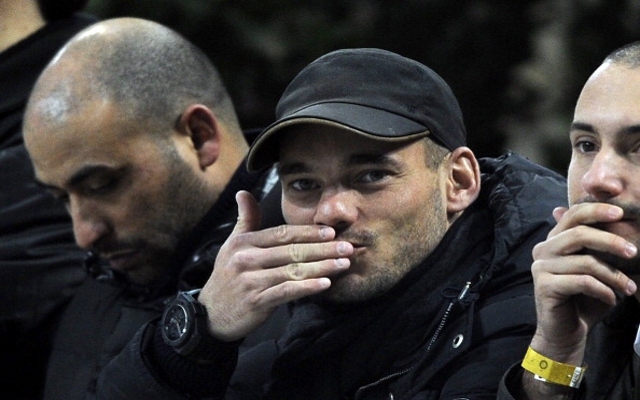 The 29-year-old was undoubtedly at the top of his game during the 2009/10 season with Inter Milan, when his game really developed under then-manager Jose Mourinho. Sneijder was the heart of that team, scoring 8 goals and providing 16 assists as the Italians won the treble for the first time in their history. He was also in fine form for the Netherlands at the World Cup that summer, guiding them to the final of the competition in South Africa, where they were beaten 1-0 in a close contest with Spain, though there was no doubt he was one of the players of the tournament that year.

Sadly for him, Mourinho then left Inter to take the Real Madrid job, and there was speculation that the Portuguese coach would bring his star player with him and give him another chance to shine for Los Blancos. It wasn’t to be, and Sneijder’s form dipped along with the whole Inter side under new manager Rafael Benitez.

As Inter went downhill, Sneijder was strongly linked with a move to Manchester United, though it never materialised, which many neutrals will see as a great shame, as there’s no doubt the midfield maestro would have made an excellent replacement for Paul Scholes when at his peak.

Unhappy and somewhat forced out of the picture at the San Siro, Sneijder finally got a move away from the club this January, joining big-spending Turkish giants Galatasaray for just over £6million. There have been glimpses of his best performances since moving to Turkey, and this has seen him linked again with his old boss Mourinho, who is now at Chelsea.

It would certainly be great to see Sneijder playing in a top team again, and there’s no doubt he would add great quality to English football, even if he is not quite the player he was three years ago. His raw ability and achievements in the game still mean he is worthy of a place among the best footballers in the world at the moment.