Originally a product of Barcelona’s famed La Masia youth system, Jordi Alba made his return to the Nou Camp in the summer of 2012 for around £12million, and has proved an excellent addition to this already vastly talented squad.

The 24-year-old had spent most of his career with Valencia, becoming a regular in 2009 after a successful loan stint at Gimnastic. He quickly established himself as a top performer in La Liga and earned his first call-up to the senior Spanish national team in 2011. He was often used as a winger at his old club, inter-changing with Jeremy Mathieu down the left-hand side, though his manager at the time, Unai Emery felt his potential was best used as a left-back.

It was at Euro 2012 that he truly announced himself on the big stage, starring as Spain won a third major tournament in a row, and even getting forward from left-back to score an excellent second goal in his country’s 4-0 thrashing of Italy in the final. His long off-the-ball run from one end of the pitch to another to race on to Xavi’s through-ball epitomised what his game is all about, and he finished off this fine move with all the composure of a top striker, slotting coolly past Gianluigi Buffon in Italy’s goal. 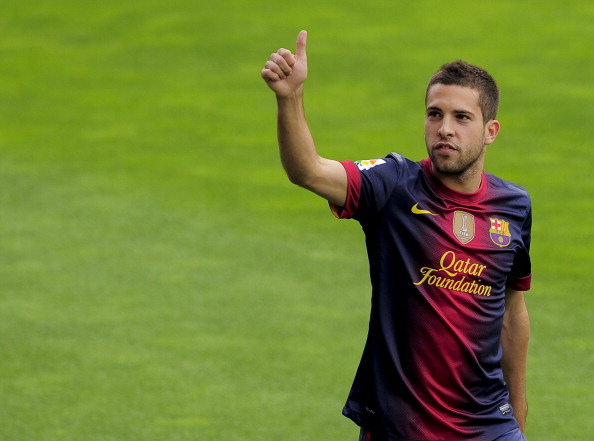 Alba’s excellent pace, technique and willingness to get forward make him the ideal Barcelona full-back, finally giving them attacking options from both flanks after years of relying mostly on Dani Alves on the other side to provide their width, as former left-back Eric Abidal was a more defensive-minded option in that position.

It was no surprise to see Alba find success at Barcelona, with an impressive four goals and five assists helping them to win back the title off fierce rivals Real Madrid, and he will surely only continue to get better as he matures and settles into Tito Vilanova’s side. He would also benefit greatly from some improvements in the defence overall, as Barca struggled in that department particularly against the bigger sides this season.

There are few better attacking full-backs in the game at the moment, and though defenders don’t always get the credit they deserve, Alba’s all-round abilities make him an important member of both of these current superb Barcelona and Spain teams, and he deserves his place among the best footballers in the world.