Bernabeu star goes out of his way to scotch speculation that he is happy to remain at Real Madrid.

In a move that is sure to anger Bernabeu chiefs, Cristiano Ronaldo had made a point of taking to his Twitter account to state firmly that he has not signed a new Real Madrid contract. 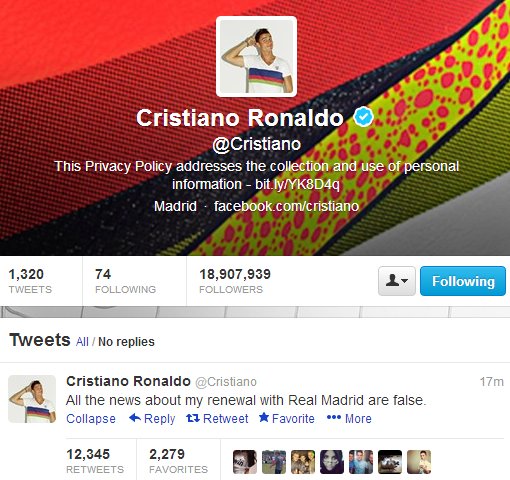 To opt to make such a statement will leave many wondering about the 28 year old’s future at the Spanish giants, and it’s a move that will certainly see interested parties step-up efforts to sign the Portuguese international.

For Ronaldo to make a point of saying he is not in talks to renew his Real Madrid deal is a fairly drastic measure to take and one that in many ways suggests the former Man United man is not happy at the La Liga side.

Just minutes after he had tweeted to his 18 million plus followers his status had been Retweeted by 12,000+ times, such a move is sure to provoke a reaction and could well lead to Ronaldo’s eventual departure.