It’s been another terrific season for young Fiorentina striker Stevan Jovetic, who has been the subject of much transfer speculation involving moves to Arsenal, Chelsea and Juventus this summer.

The 23-year-old has emerged as one of the best players in Serie A over the last couple of years, scoring 26 goals in the last two seasons in a creative forward role for La Viola. Known for his great technique and vision, he can also play in his team mates effectively, and this all-round ability appeals in particular to Arsenal manager Arsene Wenger, who has been chasing him for months.

The Montenegro international has been in Italy for five years since he joined for £8million as a promising teenager from Serbian outfit Partizan Belgrade, where he was later joined by his equally gifted team-mate Adem Ljajic, and could now be heading for the Premier League this summer as Fiorentina seem to be facing the fact that they won’t be able to keep him for much longer. 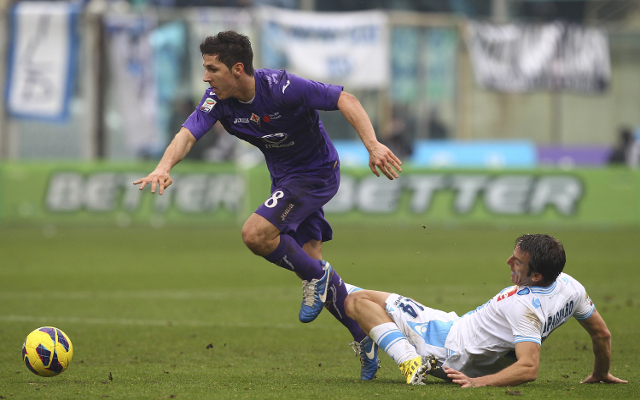 Arsenal were thought to be leading the chase for Jovetic with a deal worth around £15million, but interest from Juventus and Chelsea has seen his value rise to £25million. Jose Mourinho has identified him as a prime target upon returning to Stamford Bridge as manager, and that may now be his most likely destination as Fiorentina do not wish to sell their star player to an Italian rival.

There is no doubt that Jovetic would fit in well in the Premier League, whether it is at Arsenal or Chelsea, and his form in recent times suggest he has a great future in the game, and that he would be well worth his sizeable transfer fee.

Jovetic also has an impressive record of 10 goals in 26 appearances for Montenegro, and he could showcase his talents at next summer’s World Cup as his international team continue to progress well in their qualifying group.