Real Madrid and Spain goalkeeper Iker Casillas has achieved basically everything there is to achieve in football, breaking numerous records and winning all of the biggest trophies in his glittering 14-year career.

One of the most promising youngster coming through Real Madrid’s academy, Casillas established himself as first choice for La Liga’s biggest club in 1999 at the age of just 18. At the end of that season he became the youngest goalkeeper to play in a Champions League final, keeping a clean sheet as an added bonus as Real beat Valencia 3-0 to win the trophy.

It was a fine start to his career, and his rise continued, as he helped Real to victory in the Champions League final once again just two years later, putting in a man-of-the-match performance in a 2-1 win over Bayer Leverkusen. By then he was also first choice for the Spanish national team, and represented them at the 2002 World Cup. 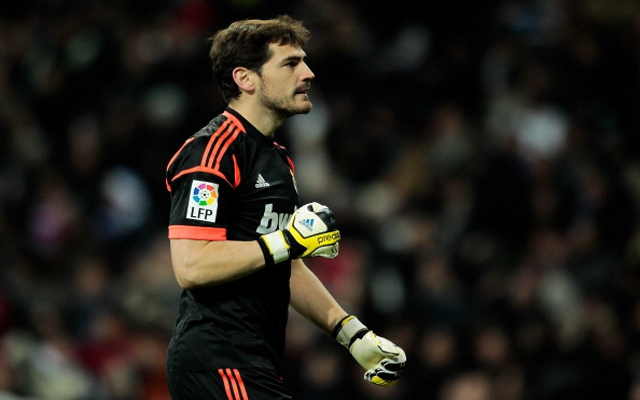 After more trophies with Real Madrid, Casillas was made captain of the national side in 2008 after his team-mate Raul was left out of the squad. He then led his country to glory in that tournament as they beat Germany 1-0 in the final. He has been captain ever since and added further silverware with the World Cup in 2010 and the European Championships again in 2012, keeping clean sheets in all three finals.

He was also made Real Madrid captain in 2010 after Raul left the club, and now holds the club record for appearances for a goalkeeper. He added a further La Liga title to his collection in 2012 and is being talked about as one of the best goalkeepers of all time. He is the most capped player for the Spanish national team and has won numerous individual accolades, such as the IFFHS Best Goalkeeper Award, which he has won a record five times in a row.

There’s little more that can be said about Casillas, but he will certainly be remembered as a great of the game, and deservedly so. His form dipped slightly this season and he was harshly dropped to the bench by Jose Mourinho, but he undoubtedly remains one of the world’s best players.