There’s no doubt this lively winger can delight as well as frustrate in equal measure, but in terms of pure talent, Arjen Robben has been up there with the world’s best for many years now since making his breakthrough as a youngster at PSV Eindhoven.

His talent was obvious even as a teenager, as he earned a big move to PSV in 2002 when he was still only 18. His skill, pace and eye for goal quickly got him on the radar of several of Europe’s top clubs, with Manchester United particularly keen to sign him, though their small bid of just £6million was instantly rejected by the Eredivisie club. Chelsea came back with an offer of £12million, which was accepted, and this exciting young talent became the latest addition to the Roman Abramovich revolution at Stamford Bridge.

Robben proved an instant hit in the Premier League, scoring 9 goals and terrorising defences up and down the country as he helped the Blues win the Premier League title, their first in 50 years. He continued his fine form next season but soon fell out of favour due to growing inconsistency and injury problems, though this did not put off Real Madrid signing him for £24million. 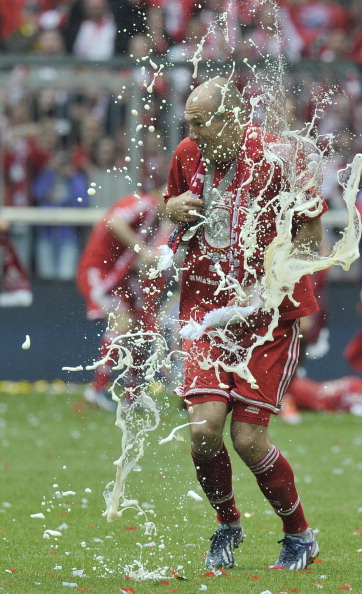 The Dutchman never truly settled in Spain either, lasting just two seasons at the Bernabeu, before making a move to another European giant in Bayern Munich for £21million. It was in Germany that he has arguably found the best form of his career, and though he has had frustrating times in notable cup finals, missing chances both for Bayern in the Champions League finals against Inter Milan and Chelsea, and for the Netherlands in the World Cup final defeat to Spain, he redeemed himself this year with an excellent display to score the winner in Bayern’s win over Borussia Dortmund. He also set up the first goal for Mario Mandzukic and celebrated the best season of his career as Juup Heynckes’ side won the treble.

Robben’s pace and trickery make him unpredictable to play against – as well as to play with – and he is certainly a joy to watch when at his best. His 13 goals and seven assists for Bayern this season played a big part in their amazing success, and his overall collection of medals do not lie – Robben has won league titles in four different countries, as well as numerous cups, and now the Champions League.

Many argue that he is over-rated, but perhaps so much so that he has actually become rather under-rated, and all evidence suggests he is, and has for a long time been, one of the world’s best players.