A look at five big players who could leave the Premier League this summer, and who could replace them.

Manchester United star Wayne Rooney has rocked the footballing world by submitting a transfer request. The 27-year-old has been a big success in his nine years at Old Trafford, scoring 197 goals in 400 games for the club, and helping the Red Devils to five Premier League title wins and the Champions League.

However, he had a difficult season this year, often being played out of position to accommodate the club’s new star player Robin van Persie, and sometimes simply being left out of the team altogether. He seems to feel it is time for a new challenge, and there are plenty of big clubs who would be happy to have him.

Since news of his transfer request, the likes of Barcelona, Real Madrid and PSG have been linked with big-money moves for him, as well as United’s Premier League rivals Manchester City, Chelsea and Arsenal. Rooney almost left the club in 2010, and will surely do so this time as his heart is clearly not in it anymore. United seem to have a number of targets in mind to replace him, so they may too feel it is time to cash in and wave goodbye to the former Everton prodigy. 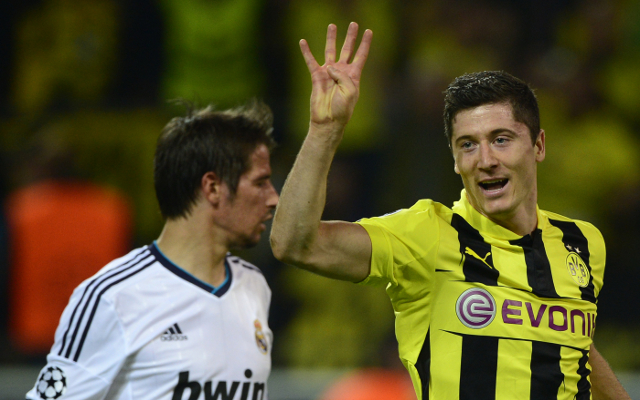 A fine replacement for Rooney would be Robert Lewandowski of Borussia Dortmund. The Polish striker was linked with the club last summer before they opted to sign van Persie, and could now be the ideal partner for the Dutchman with Rooney failing to produce the partnership that was expected with him.

Lewandowski is one of the best strikers in the game at the moment, scoring 36 times for Jurgen Klopp’s side this season as they finished second in the Bundesliga and reached the Champions League final. He famously scored four times in Dortmund’s amazing 4-1 semi-final victory over Real Madrid, and his enhanced reputation has seen him linked with a number of top clubs, including Chelsea and Barcelona.

Lewandowski himself preferred a move to Dortmund’s rivals Bayern Munich, but his club have blocked the move, meaning he could well end up in England. With just a year remaining on his contract he could come cheap at around £20million, and he looks made for a stage as big as Old Trafford, where he would surely continue his great success.

Other targets for United have included Colombian hot-shot Radamel Falcao, though he ended up joining Monaco for £51million. Galatasaray’s Burak Yilmaz has also been linked, but Lewandowski seems like the best choice for United, given his fine form and desire to leave his current club.