Roma legend Francesco Totti has had a long and great career all for the same club. The Italian could no doubt have played for any team in the world at the height of his career (and arguably now) as he is widely regarded as one of the best players of his generation.

Now 36, he is still showing some top form, scoring 12 goals and providing 12 assists for Roma this season, putting him up there with the likes of Andres Iniesta, Lionel Messi, Mesut Ozil and Juan Mata as one of Europe’s best creators. His performances have been an inspiration in an otherwise below-par Roma team that could only manage a 6th place finish in Serie A this year.

Making his debut way back in 1992, Totti became a regular in the team in the 1994/95 season, scoring seven goals. He became club captain at the age of just 21, highlighting his maturity and inspiration even in his earlier years. 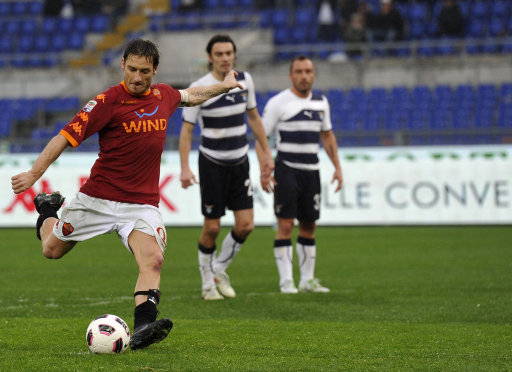 Throughout his career he has chopped and changed between being used as an out-and-out striker, or as the team’s main playmaker in a deeper midfield role. His all-round talent for passing, shooting and dribbling has meant he has excelled wherever he’s played, and while he is probably best known as an attacking midfielder, he has managed to score 32 goals in a season when played upfront.

Although Totti has many more runners-up medals than he would like, he has also won some of the biggest trophies. He was a Serie A winner with Roma in 2000/01, proving an influential figure in their title win as he was voted Italian Player of the Year. He has also won the ultimate prize with the Italian national team, as he was part of their victorious squad in the 2006 World Cup in Germany, finishing the tournament with the highest number of assists. In total, he has 9 goals for Italy in 58 appearances, and retired from international football in 2006.

He is Roma’s all-time record appearance maker and goal-scorer, with 282 goals in 678 games for the club. He is also the second highest goal-scorer in the entire history of Serie A with 227 league goals.

Totti is certainly the best Roma player of all time, and one of the all-time great one-club men, a rarity in the modern game. It is perhaps sad that this legendary player could not win more silverware elsewhere, but that won’t stop him being remembered as a true great of the game, and there is still plenty more to come from him even in his advancing years. Even at 36, Totti is still a world class performer and up there with the best in the world.