Bastian Schweinsteiger has been around for a long time now, and until this season he has perhaps been something of an under-rated player in world football. However, his excellent role in Bayern Munich’s amazing treble-winning season will hopefully now see him gain some much-deserved reocognition as one of the best midfielders in the world.

The German first burst onto the scene as a regular for Bayern in 2004, when he also earned his first caps for the senior national team. As a youngster, he made a name for himself as a versatile attacking midfielder with a powerful long range shot, taking particular advantage at the 2006 World cup, when he struck two beauties as Germany beat Portugal in the third-place playoff. 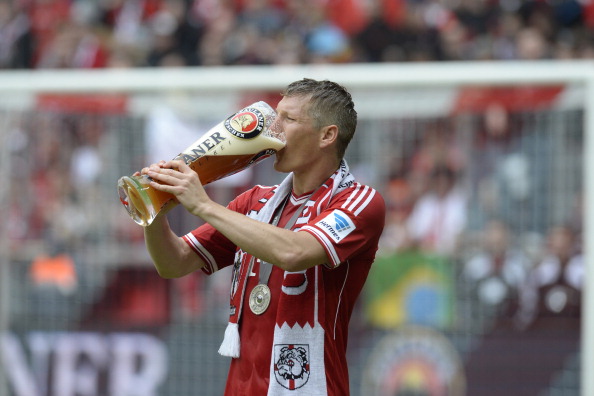 As time has gone on, Schweinsteiger has reverted to a deeper role for club and country, and his range of passing has made this an easy transition for him to make. He has particularly shone in this position alongside Javi Martinez for Bayern this season, keeping play ticking along and supplying his more attack-minded team-mates with ammunition.

The 28-year-old managed 9 goals and 7 assists for Bayern this season, and is one of many players whose reputation has been much enhanced by the immense recent success of Juup Heynckes’ side. His passing stats are excellent, with an 87.9% success rate, and an average of 9 accurate long balls per game. As he grows into this role he will no doubt be seen alongside the likes of Andrea Pirlo and Xavi as one of the game’s great deep-lying midfield playmakers.

In total, Schweinsteiger has made 437 appearances for Bayern Munich, scoring 55 goals for the club and winning an incredible six Bundesliga titles, as well as numerous cups and the Champions League title this year.

He has been unfortunate not to taste success with the German national team, who have impressed in the last few tournaments without quite making it all the way to victory, but it would be no surprise if he helped them to a World Cup win in Brazil next summer. So far, he has 98 caps for Germany, as well as 24 goals and 32 assists.

There is still time for Schweinsteiger to improve even further, and he is likely to keep bringing success to this incredible Bayern Munich team, who will be managed by Pep Guardiola next season in what promises to be an exciting year for German football.